“We are 20 years too old for this trip,” I protested. “This trip” was a 3-day, 2-night SUV trip through the high plains of Bolivia and ending in the Uyuni salt flat, the world’s largest. The reviews and tour operators were blunt – there is nothing luxurious about the trip. We would be bumping along basic roads, staying in hostels, and paying for cold showers. The basic accommodations weren’t my main issue – I’ve grown more accustomed to roughing it than I ever expected –  road trips are not my thing. No matter how beautiful the scenery, my attention span is short. But Matt was set on going, and our friend Lisa enticed me with some fantastic photos and assurances that the scenery is different at every turn, so I ultimately acquiesced.

We were in San Pedro de Atacama, Chile, and would cross the Chile-Bolivia border at the onset of the trip. We didn’t have Bolivian visas, but the tour operator told us that all we needed were two headshots each, our yellow fever cards and passports in order to get the visas at the border. We had one one photo each, and he assured us that it would likely be fine. We were booked on day tours in San Pedro and when we tried to get new photos in the late afternoon the day before our Uyuni tour, we were out of luck: the store was open, but the woman who took the photos wasn’t working that day. Four years ago we would have freaked out at this news and railed about how inefficient it is to have only one worker who can take a picture anywhere in town, but we just shrugged and hoped for the best. 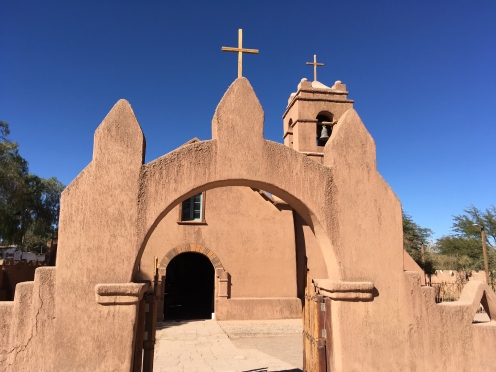 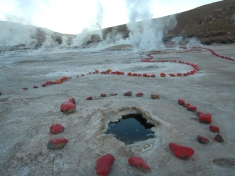 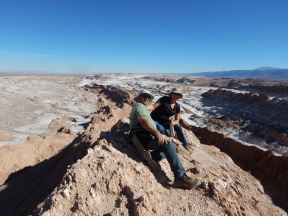 Sand as Far as the Eye Can See

On the day of the trip, a Chilean driver picked us up in a van early in the morning and drove us about 6 blocks to the Chilean immigration office where we joined the the long line of fellow travelers. After about an hour, and somehow with our group being corralled to be dead last, we had our exit stamps and were free to leave the country. 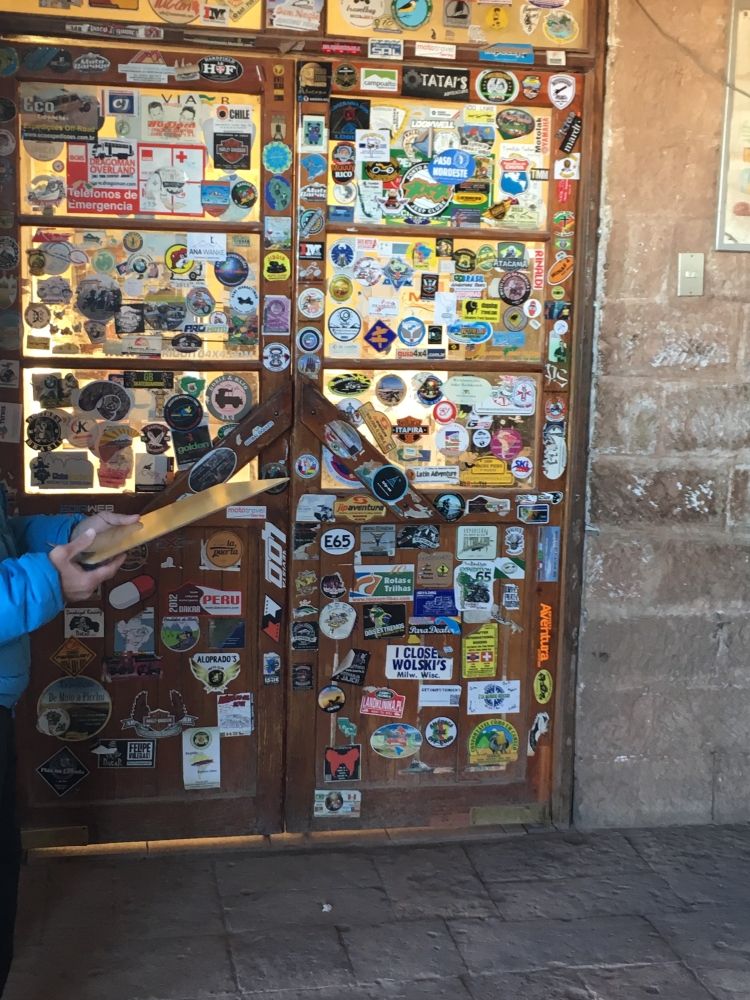 Door to the Immigration Office – Look Carefully – I Closed Wolski’s!

We set off through the desert to the border. That is, first we hit the Chilean border and then after 10 minutes of no-man’s land, we hit Bolivia.

Bolivia Was Waiting, but Would We Get In? 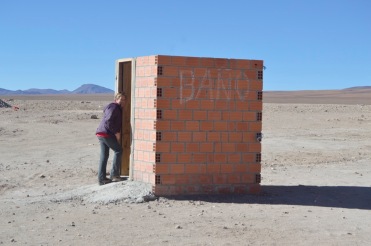 Flag of the Bolivian Indigenous Cultures

We headed inside to immigration while our Chilean driver transerred our stuff to the SUV and our Bolivian driver. We were a little nervous about the one-photo issue when we got to the front of the immigration line. There were two men working: a policeman and the immigration official. The policeman took our documents and asked for our color copies. Ummm, what? We had passport copies somewhere in our luggage that was now strapped down on the SUV, but no copies of our yellow fever card. Matt let me do the talking and I played the stupid card – because we were. I apologized profusely, asked what we could do, and explained that no one told us we needed copies. The policeman feigned concern for us, explained they had no copy machine in the building (obviously, I’m not sure there was electricity!), and told us how much they needed the copies. We danced the dance, both knowing that the universal finale was inevitable – cold, hard, American cash. When the policeman pulled out his phone and started taking pictures of our documents, I knew we were in. He told us that he would drive to San Pedro on his lunch break to print off the photos and a small tip would be appreciated for his effort. I knew I had $30 in one pocket but also knew that there was no way to surreptitiously separate the $10 from the $20, so I pulled out the $30 and asked if that would compensate him for his time. No surprise: it would.

He passed us over to the immigration official and explained how he would come with our documents later. I believe this to be true in that everyone else had copies that were attached to the paperwork, but I suspect that no special trip was made and that he simply printed off the documents when he went home for the night. The immigration official was friendly and didn’t raise a fuss. The fee was $320 and I handed him 4 hundreds. He peeled off 3 twenties and handed them to me one-by-one while complimenting my Spanish, showing me the 10-year visas he gave us and urging us to return many times to Bolivia. I knew, and he knew that I knew, that he was ripping me off but after about a 10 second stare down, I smiled, said thanks and we skedaddled with our visa stamps.

We lucked out and had a great group – Beatrice and Jorge from Puerto Rico and Eilidh and Justine from Scotland. While they were all at least 20 years younger than us, we got along well and had good laughs. The fact that Beatrice and Jorge were bilingual was an added bonus as our driver only spoke Spanish and they could translate as needed (although Matt and I understood most of what he told us). We were not traveling in a caravan, but all the SUV tours were going to the same places along the way. We ran into a few groups and they all seemed crabby compared to ours, so we felt fortunate. Although our food was so terrible that a stray dog wouldn’t even eat the cake I offered it. One day I traded my pâté and stale bread for another traveler’s cake. Both parties considered themselves to have received the better end of that bargain.

Not Really Alone in the Desert 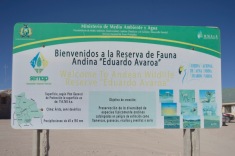 Chatting with Fellow Travelers (and Getting Cake) What a great first day! Who knew that sand came in so many colors?! Or that pink flamingoes live at 15,000 feet above sea level on a red lake in a desert? We were delighted at every turn. 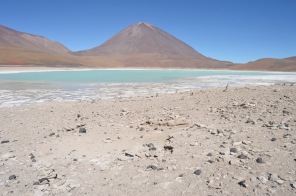 A Contrast of Colors

The Good Part of the Road

Part of the Scenery 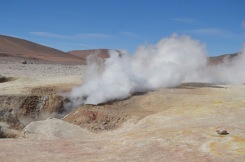 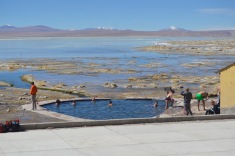 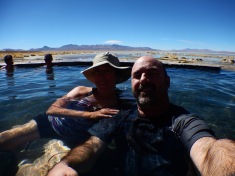 Built for the Tourists 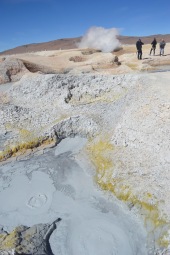 How Did Those Rocks Get There?

We settled into our hostel for the night – all 6 to a room! Our companions gave us the “matrimonial” bed – two twins pushed together – but it was so cold in the unheated hostel at over 15,000 feet that Matt and I snuggled into one twin bed to keep warm.

Next Up – Rocks, fox and more!

2 thoughts on “An Out-of-This-World Experience”