This is what the library looked like when I started the project in June:

The New Stacks – Room to Grow!

And closed the library for the school year last Friday: 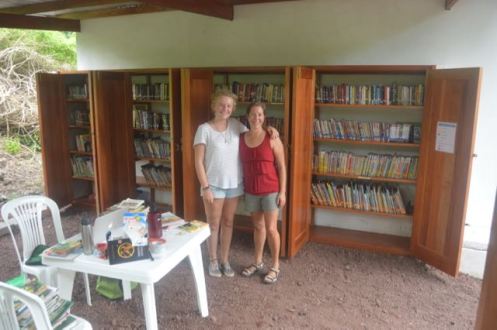 Helena and Kerry Finishing Up for the Year 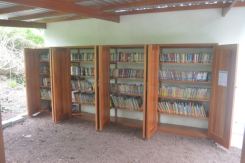 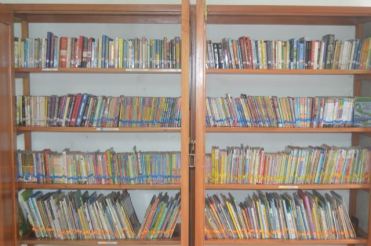 Fabulous Volunteer About two weeks after the library opened, the school welcomed a volunteer from Germany, the amazing Helena. In addition to being hard working, fluent in English, friendly and kind, Helena is mature beyond her years. Helena’s help was crucial as we embarked on changing the school culture from one with limited reading and no accountability for the books to one with a fully functional library. Between the two of us, we were able to keep up with the indexing and labeling of donated books, have the library open 3 days a week and provide set library times for all of the classes. 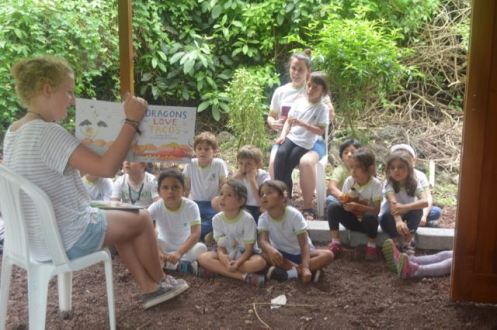 Engrossed (Most of Them) 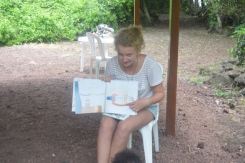 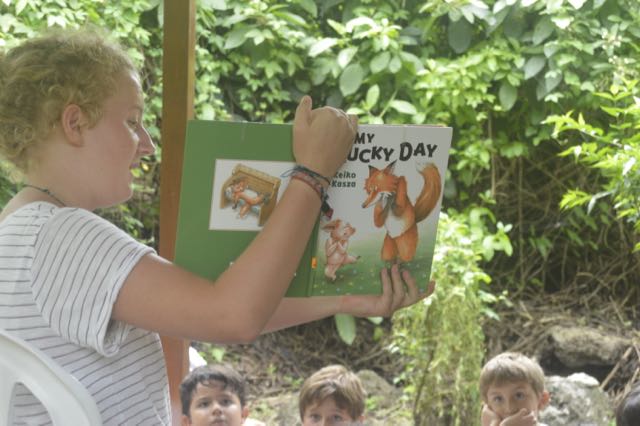 Library Accomplishments In the 4 months the library has been open, we:

Fundraising In addition to the on-site work, we continued working to obtain books and other resources for the library. In November, through the efforts of Hector Viela and Amy Torres, we started a GoFundMe campaign that raised $725. https://www.gofundme.com/wa6skk5z. We have spent about 1/2 of the funds to buy library materials and to mail books that Amy continues to collect for us in the US. The remaining funds will be used to build seating for the library once we have enough raised to commission some tables and benches.

Book Donations We continue to receive book donations from friends in the US. Thank you Tanya Oemig and Candy Underwood for mailing books to the Galapagos! Matt and I also brought back 100 pounds of books from a weekend trip to visit our family in NYC. Thanks to Mick, Andy, Tom and Sue for collecting these books (and Mary Ziino and Bridget Paul for their donations) and bringing them to us in NYC. Galapagos visitor Alex Doubek kindly brought some books from his collection when Mick put us in touch before his trip. Amy Torres also was able to deliver another 84 books to us via Pablo Weaver and his students from the University of La Verne who came on a study trip to the Galapagos. Amy is visiting us again this summer, this time bringing her daughter, more books and her never-ending support! 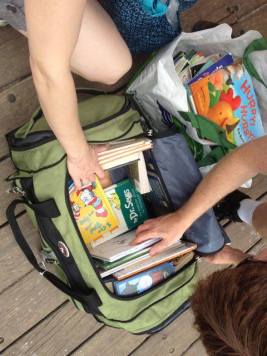 Does Kieran Weigh More than the Books?

Welcome and Thank You!

We also received donations from the school community. A school parent and labeling volunteer, Jessi Pfeltz Mahauad, donated 50 books when her family returned to the US. A 6th grade student, Lymin, took it upon herself to donate books she had read or outgrown, and additional parents have donated some books from their collections as well.

While our other book collection efforts have yielded great books, mailing books is cost prohibitive and takes several months, while transporting large quantities of books from the US is inconvenient and burdensome for the traveler. Through the Bring a Book program, folks can bring one or two books, nothing onerous, and we get a steady stream of needed resources. In the first 2 months of the program we received 370 books! When the library opened, our limited book supply meant that students could only take out one book at a time per language and teachers were limited in the books they could check out for classroom use. Due to the new books, we will be able to increase the checkout limit and provide more books to the teachers.

Community Value While the library patrons are limited to the school community, the impact goes beyond our students. One 6th grade student consistently took out a picture book in Spanish to take home to read to his younger sister. A teacher also checked out books to read to her young child. It is exciting that the resources are being used to instill a love of reading in children who are too young to attend school.

Thank you to everyone who has supported the library project. It has been exactly what I need. I find island living extremely challenging: isolating, limited and lonely at times. Reading is my passion and to turn that into an on-going volunteer project that engages me is a win-win for me and the school.

Happy 2016 to All! I am all set for it to be a fantastic year because I participated in all of the Ecuadorian superstitions/traditions in order to ensure luck, prosperity and love (hot sex too, according to some). I collected everyone’s advice and on December 31, I was ready. My lovely German volunteer, Helena, was on board with me to make 2016 a year to remember.

Shopping for Luck. Or Hot Sex.

I first heard that one wears yellow underwear for luck. I don’t own yellow underwear (TMI?) but while out shopping on New Year’s Eve came across this display and thought, “why not?” I was all set when we headed out for dinner with some friends on December 31 until one friend told me that you couldn’t wear the underwear early but had to change into it at midnight. Umm, we planned to be in the main square watching fireworks (and eating grapes, but that comes later) at midnight, so I opted to ignore this additional caveat. Another friend who heard of our tradition quest asked about the yellow underwear, but she told me it was to ensure a year of hot sex and that the underwear had to be new and a gift. However, she said wearing it all night was just fine. As my underwear was new and Matt had pulled the money out of his wallet to pay for it and our other purchases, I am all set for a year of luck and/or hot sex.

Wearing red and green. Red is for love and green is for health. Which one to pick? If I don’t wear red, will Matt run off with an 18 year old Galapagueña? But health is top of my list as I get older. I opted for a shirt with red in it and green earrings, thus covering both bases. Matt stuck with plaid shorts that had a thin line of green, so apparently he is not concerned about me running off with a hottie surfer. Helena covered all of the bases with patterned underwear with red, yellow and green.

Money in one’s shoe to bring a year of prosperity. This was a problem as I wear sandals here. A little tape and I was set. A cabbie had told me $10, so I went with that figuring I didn’t mind losing $10 if the tape loosened.

Once again, caveats were added by a friend – LEFT shoe and it was better on the sole. Also, the bigger the bill the more prosperous, according to some. We were already out so I did a quick adjustment with my 10 spot.

Change jingling in one’s pocket is also said to bring prosperity. I put change in BOTH pockets and fully expect to win a big lottery jackpot this year. (Note I did not say “win the lottery” as I do not intend all this effort to result in me winning a measly $2 in the Powerball!). Helena was equally committed and changed out of her cute, pocketless skirt into shorts with pockets.

My final tradition was to eat 12 grapes at the stroke of midnight, while making a wish for each month. I gave it a shot but could only find large, seeded grapes on the island and it took me about 3 minutes to eat 12 of them. Maybe my January wish will come true? Matt and Helena did a much better job. 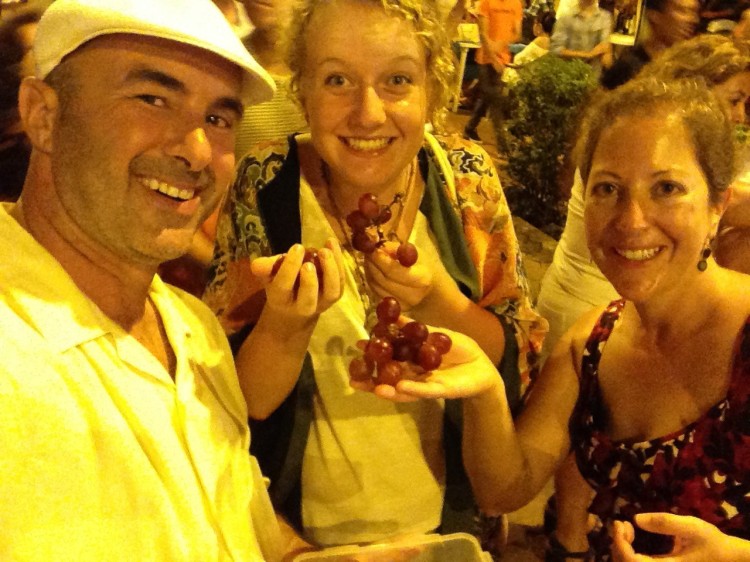 I contemplated another tradition to ensure a year of travel: pack a suitcase, carry your passport and run around your block or neighborhood at midnight. The farther you run; the farther you will travel. I decided to skip this one because my passport is with our attorney in Quito for visa paperwork, we live on an island and won’t have much opportunity to travel this year, and we planned to be in the square at midnight. Helena really wants to travel this year and was stuck with a dilemma until another friend said it was adequate to pack your suitcase and leave it by the door of your house and that your passport was not needed. Others questioned this modification, but he said that he did it twice and one year spent considerable time in Colombia and the other year spent 3 months in the US. We stopped at Helena’s house so she could pack her suitcase, and I hope she has a fantastic year of travel.

Another tradition is for men to dress up as the widow of the old year and beg for alms. During the day, Matt and I saw about a dozen such widows. He and our friends decided that they will participate in this tradition next year, so size 13 heels and a wig are now on our to-buy list for the US!

The night was a lot of fun with people out and about, effigies (Año Viejo or Old Year) that were burned at midnight, music and fireworks.

Crowds for the Fireworks

Checking out the Festivities

The effigies were a bit confusing. Why were people burning cartoon characters or the Pope? Especially the Pope tableau with the army figures where the Pope was labeled the “Pope of Peace” in obvious contract to the tank and soldiers.

Others were easier to understand although we needed the political one explained to us. We got the significance of the President (fair game on New Year’s Eve to poke fun at him), but the animal was a sheep representing his unquestioning followers and the sandwiches because he apparently gets supporters to events by giving out food. 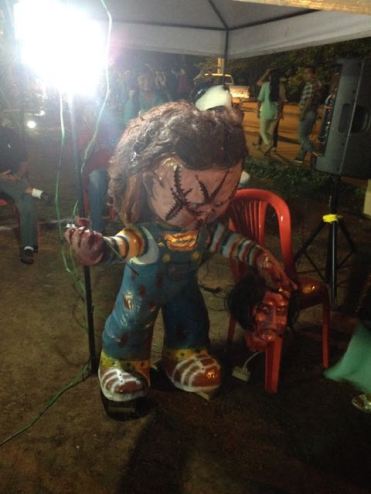 All in all, a fun celebration and a good start to 2016. I can look forward to luck, love, health, prosperity, a wish or two and hot sex!