When we arrived to Mexico in August, the restaurants were advertising chiles en nogada, a seasonal dish that also commemorates Mexican Independence. There are variations to the legend of the dish’s origin, but it is generally believed that it was created in Puebla for the military commander Agustin de Iturbide, as he passed through the town on his way to Mexico City after signing the Treaty of Cordoba, which freed Mexico from Spanish rule. The prevailing legend credits the Augustine nuns of the Santa Monica convent with creating the special dish that used local ingredients and incorporated the colors of the Mexican flag. Chiles en nogada require fresh ingredients, and the season runs from August through September although we found that some places continued serving the dish throughout October. 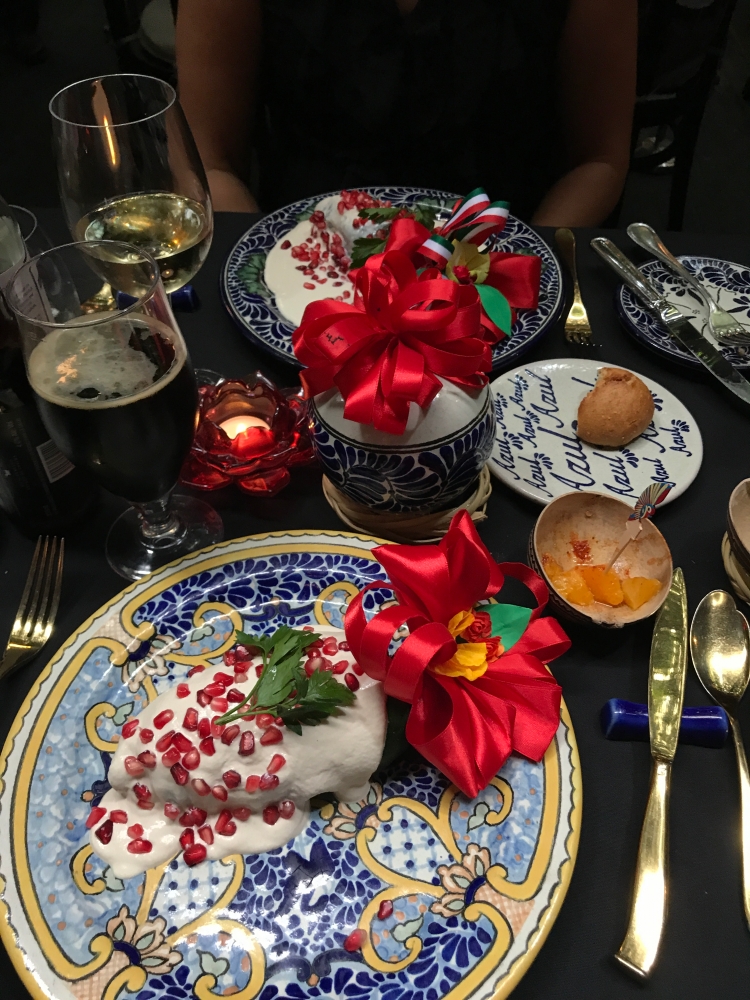 The first time I ordered the dish, I had no idea what to expect. The stuffed chile was roasted, battered and fried and covered in a sweet, creamy sauce. The chile was lukewarm and the sauce was cool – was this how the dish was meant to be served or had it sat too long under a heat lamp before being sauced and brought to the table? I wanted to make sure that I was tasting the dish in all of its glory, so we called the waiter over for clarification. He assured us that the dish was served properly and I got down to the business of enjoying every bite. I loved it! It was savory and sweet, crunchy and smooth – each bite was perfect. I resolved to enjoy the dish weekly throughout the season.

Once my culinary quest began, I noted that no two chiles en nogada were the same. They all started with a roasted poblano pepper stuffed with a meat, fruit and nut filling that was covered in a creamy walnut sauce  and festooned with pomegranate seeds. But only my first one was battered and fried, the fillings varied considerably in the meat to fruit ratio and, at one restaurant, you could order sweet or savory sauce or both. I had both, naturally, and decided that the sweet sauce was definitely for me. Similarly, discussions with locals confirmed that every family has its recipe that it swears is the best. One of Matt’s co-workers was delighted that I loved the dish so much and sent home some of his family’s batch for us – delicious!

I met Chef Paulina at an event in early September, and when she told me that she was teaching a chiles en nogada cooking class, I was sold. The class was postponed a month due to the earthquake that rocked the city, so I was suffering from chiles en nogada withdrawal by the time the class was rescheduled for late October. This was my second Mexican cooking class and both started the same way – I showed up at a stranger’s house and was instantly made to feel welcome by the assembled women. The first cooking class was as equally wonderful as Chef Paulina’s class, but it included stiff margaritas, so no blog post about that one!

Despite our propensity to chit-chat, Chef Paulina put us to work. In addition to chiles en nogada, we were also making tinga de pollo, agua de tuna and a salsa. First up was a chat about the fresh ingredients and how to peel those pesky walnuts. Not crack, people, peel! Thank god that Chef Paulina had already done that step. She then dropped a chicken breast in a pot of water and added salt, garlic, onion and, later, a cinnamon stick to prepare the chicken and a stock for the tinga. The chiles were placed to roast on the open flame and we peeled, diced and sautéed the ingredients for the filling. 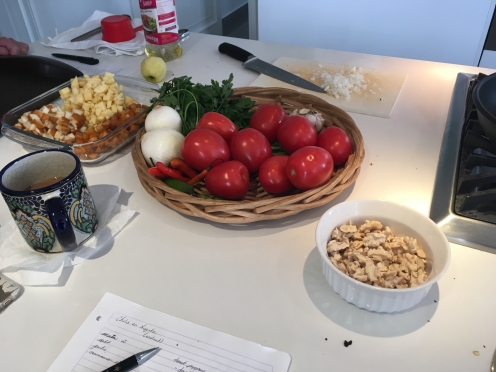 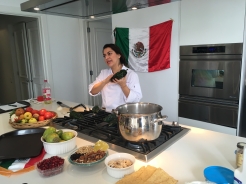 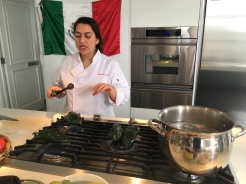 With the exception of the acitrón, the candied flesh of the biznaga cactus, the ingredients for chiles en nogada were not exotic, just numerous. Even with her purveyor connections, Chef Paulina made a few substitutions from the written recipe due to the quality of the ingredients this late in the season. The first big test of our skills came when we were each provided a roasted pepper for us to seed, remove the membrane and peel off the charred skin. It became obvious why restaurants merely roast the pepper quickly so it doesn’t char and leave the skins on! We all managed to end up with fairly intact peppers. 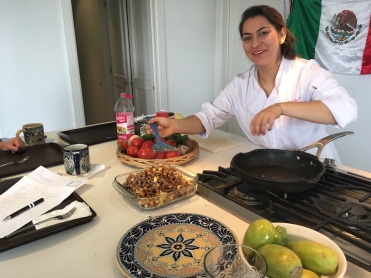 The Filling is Prepared

While we were struggling with our peppers, Chef Paulina casually tossed a few tomatoes, slices of onion, garlic and a serrano chile in a frying pan. We students panicked, looking at our recipes – what was this?! She laughed and told us it was just an easy salsa to use to top the tinga tostadas. While you can prepare a salsa with the same ingredients without roasting them, it gives the salsa more depth if the ingredients are roasted before blending. She also started sautéing the onions, garlic and chipolte for the tinga. Ultimately, Chef Paulina would add a puree of tomatoes, chicken stock, raw onions and the sautéed chipolte to the onions and now-shredded, cooked chicken and allow it to cook down until the liquid was absorbed. The blender got a workout as the sauce for the chiles en nogada was easily made by tossing the ingredients into the blender and processing until smooth (but not too smooth). 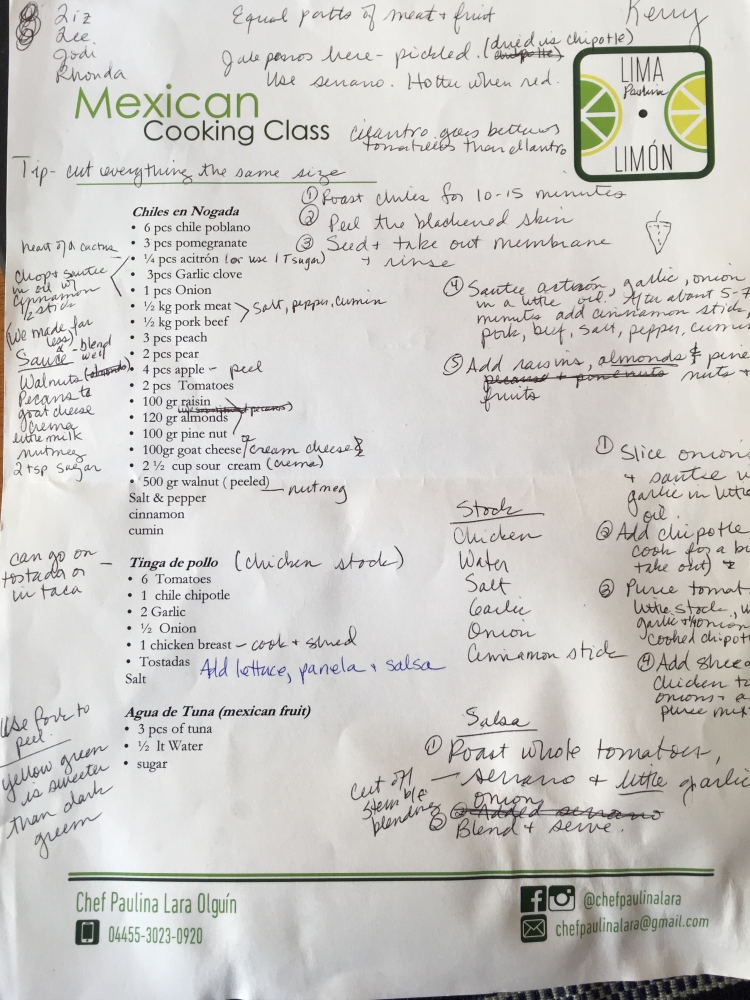 After a quick lesson on agua de tuna – which has nothing to do with fish as “tuna” in Spanish means prickly pear, or cactus fruit – we were ready for assembly. Chef Paulina explained that the tinga de pollo could be made into a taco or a tostada. If made into a taco, only the chicken tinga would be added to the soft tortilla shell. As a tostada, the tinga was topped with crema (a less-acidic, more liquid sour cream), panela cheese, lettuce and salsa. She laughed at our Tex-Mex ways of overstuffing a taco and explained that it was not done here. 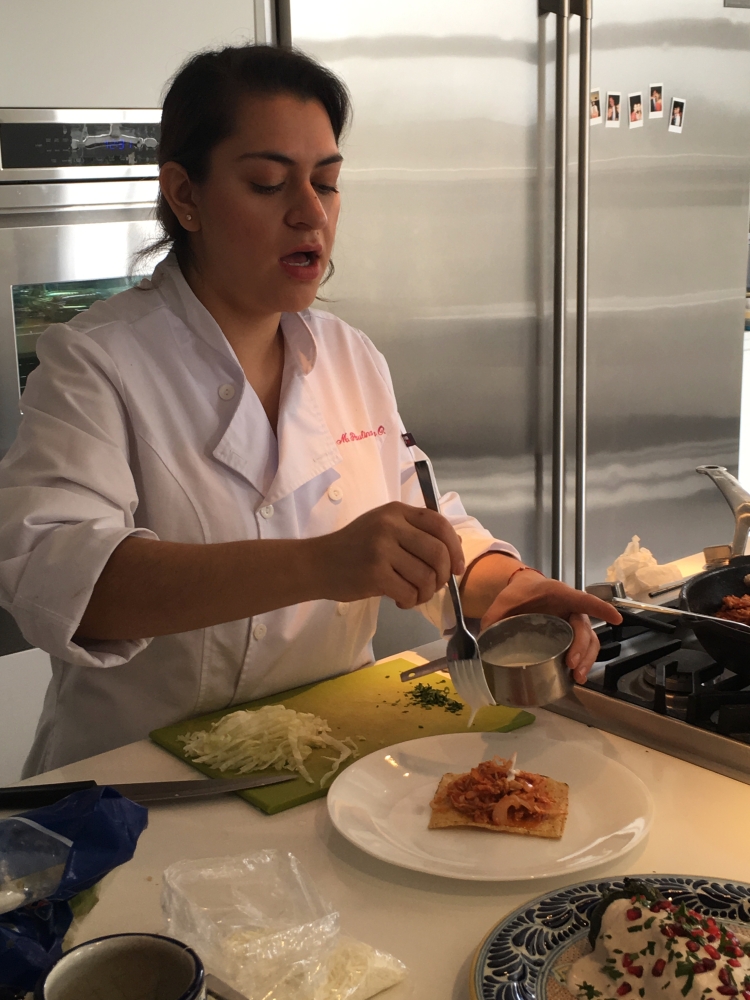 As we enjoyed the tostadas, Chef Paulina prepared the chiles en nogada for us to take home to share with our family. It was a great class: Chef Paulina was a patient instructor, everything was delicious and I met some new friends in the process.

Fruits of Our Labor 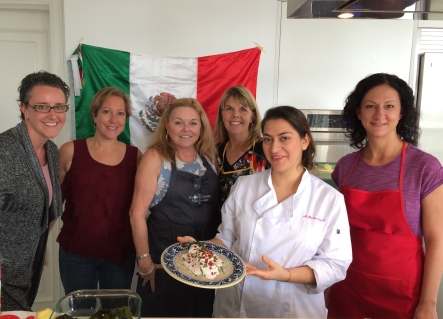 Lest you think only a professional chef can pull off these recipes, a few days after the class, I gave chicken tinga a shot.

Early in the Process

The dish came together easily. I was pretty excited when I learned that fresh corn tortillas at my local grocery store were $.67 for about 40 of them! Of course, we ultimately gringo-ized our tinga tacos and added panela cheese and lettuce. They turned out great! Maybe next year I will have a chiles en nogada party… or maybe I’ll just keep eating them in restaurants. 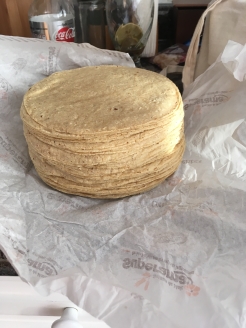 A Mountain of Tortillas