Today Matt and I experienced a god that I feel certain both of our dads would have loved: Maximón*, the cigarette smoking, booze swigging Mayan deity. 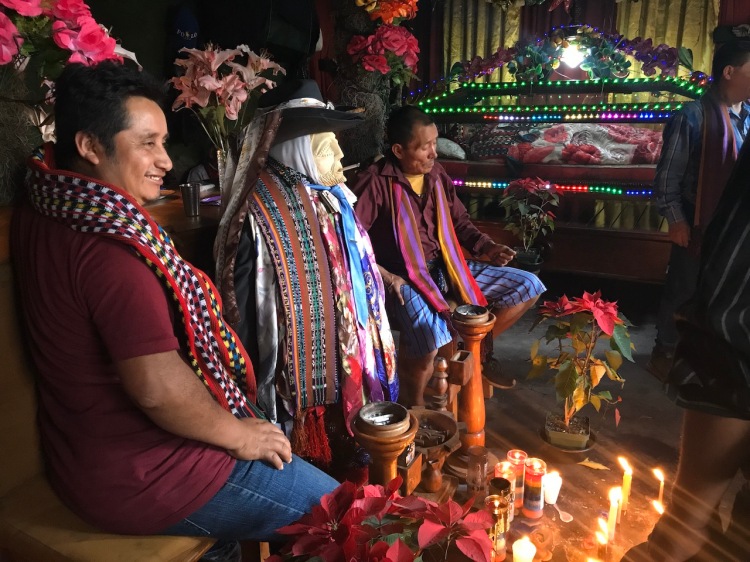 Maximón and his Buzzed Keepers

We are on Lake Atitlán, Guatemala, which is an amazing place due to the surrounding volcanoes and chill vibe. Our hotel is near Santiago, the largest town on the lake, and we walked along the local paths to get there. This was an experience in and of itself as we passed tiny garden after tiny garden, evidence of the locals scratching out a sustenance existence. Everyone who passed us greeted us warmly and with a smile. 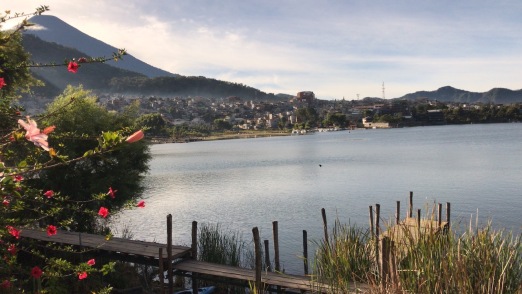 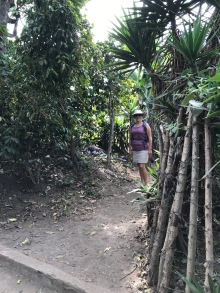 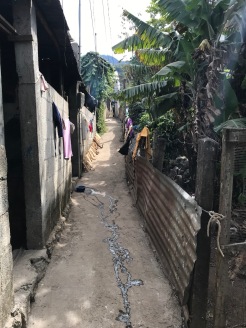 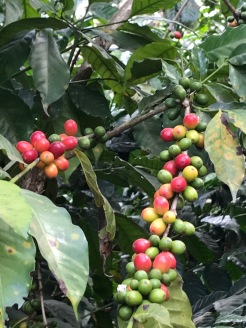 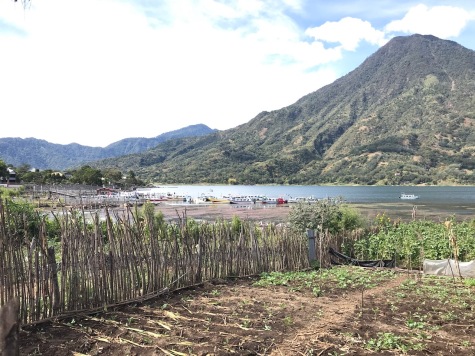 Gardens on the Lake 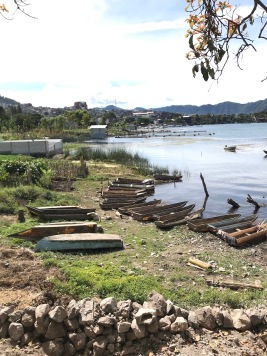 We hit the town and after a few minutes of browsing the amazing handicraft shops, we were accosted by a “guide” who offered to show us the various sites. We had heard of Maximón and knew the experience would be easier with a guide, particularly because many people in this area speak Tzu’tujil and not Spanish, so we agreed to pay an overpriced, gringo rip off price for a tour with Francisco. We set off winding through back alleys farther and farther off the tourist path. I was having flashbacks to a horrible “tour” in Morocco that ended with my friend and me locked in a rug shop, when we suddenly arrived at a nondescript private residence that is Maximón’s current abode. 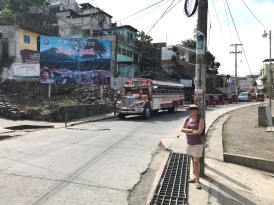 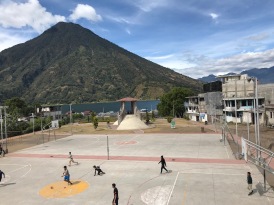 Soccer with a View 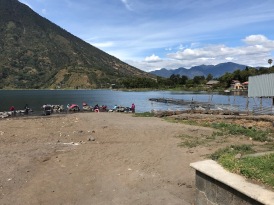 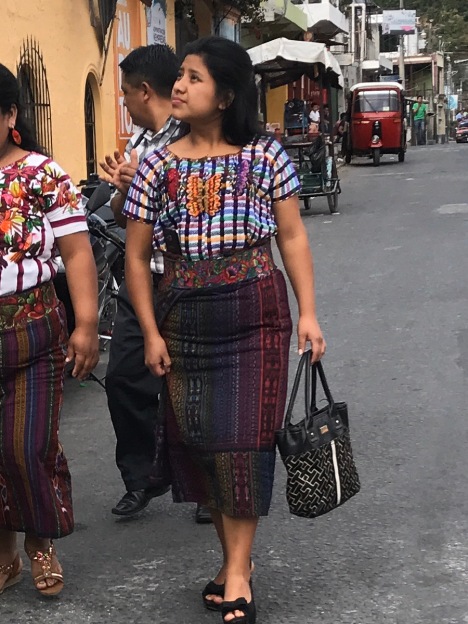 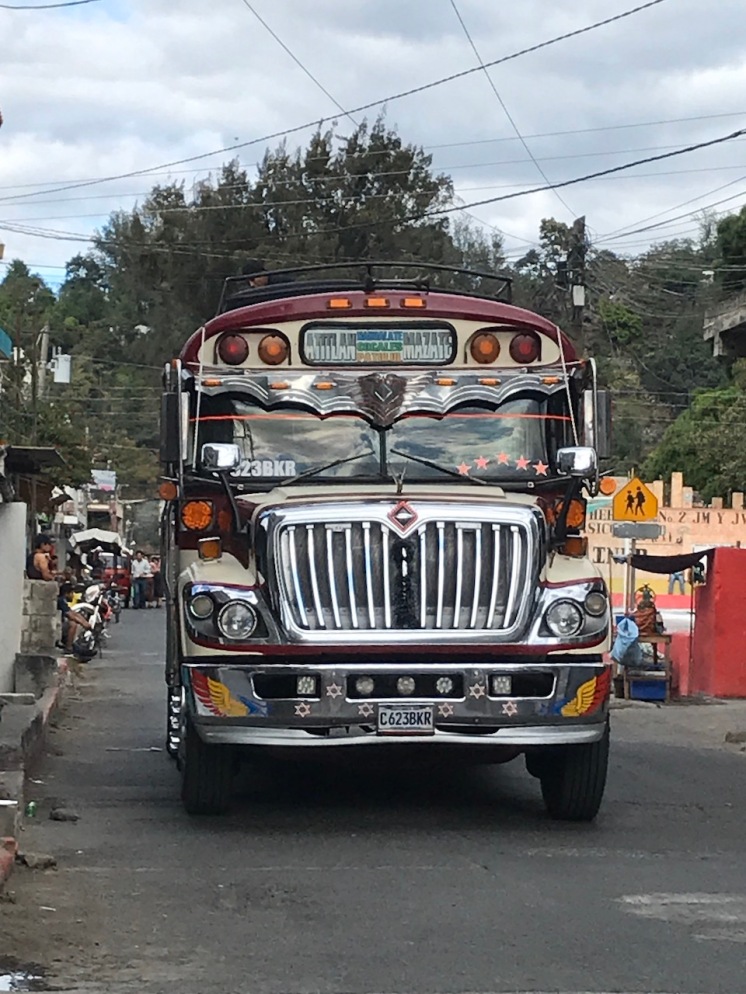 We entered and were met by a smoking Maximón, with his two handlers flanking him and candles on the floor in front of him. We paid a gratuity and photograph fee (about $15 total). These offerings were accepted and secured on the top of a stack of bills beneath Maximón’s tie. We hovered awkwardly in the small room and looked around, trying not to gawk. The room was crammed with Catholic artifacts – saints lined the perimeter, all dressed with ties or scarves and a large prone adult Jesus was swaddled in a case, draped with flashing lights and honored with lit candles in front of him. There were benches around the room with males ranging from preteens to old sitting around in various states of drowsy intoxication. After a few minutes, a place in front of Maximón opened up and we snagged prime seats to observe the action. Maximón moves every year, and it is a great honor to have him in your home. Francisco explained that the current homeowner of Maximón’s shrine chooses the house for the next year. There are 24 shaman each year: 12 men and 12 women. They each conduct different types of ceremonies and select their successors for the next year. At night Maximón is put to bed in the rafters. 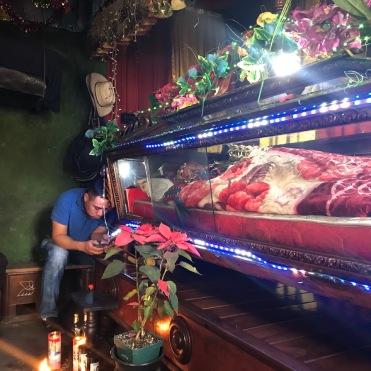 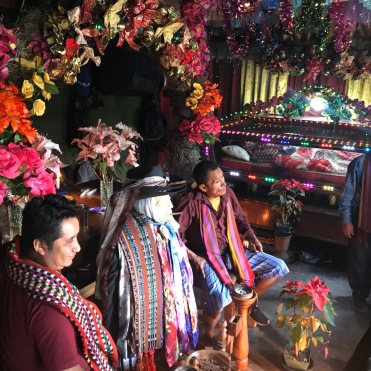 We had arrived during a ceremony, so a shaman was seated on a plastic crate in front of Maximón. He was praying in Tzu’tujil, but there didn’t seem to be urgency to the matter. Sometimes the shaman would indicate that it was time to buy more beer and a bill would be taken from Maximón’s stash and a boy sent to buy a bottle, which was shared with many of those present. At one point, a fire truck passed with its siren blaring. This generated great excitement and broke the moment as the crowd speculated as to what had occurred. Some of the younger boys and men rushed out to investigate and returned with the full report of a car accident. Occasionally the shaman would indicate that the handlers needed to serve some liquor to Maximón and they would carefully remove the cigarette and pour booze into his mouth, dabbing his lips with a towel. The cigarette was otherwise a perpetual fixture and the handlers carefully tapped ash into one ceramic bowl and collected spent butts in another. In front of Maximón was a wooden structure and these ceramic bowls were placed in their wooden holders while additional niches held a pack of cigarettes and a bottle of liquor. 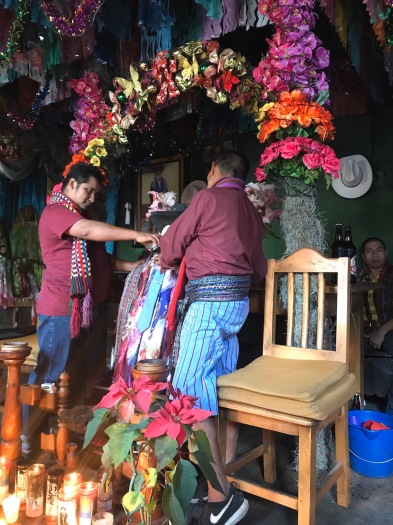 Giving a Drink to Maximón 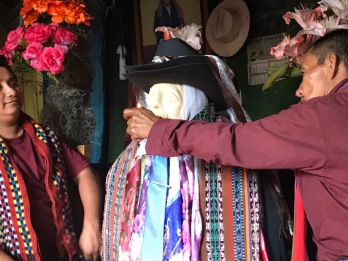 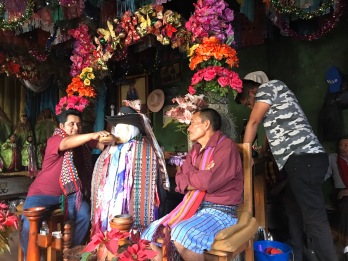 There was a point where I wondered whether this was all an elaborate hoax on the tourists. It seemed so surreal to have a cigarette smoking, booze swilling god (or saint as he is sometimes referred to). The origins of Maximón are somewhat obscure, but he predates the conquistadors and Santiago’s first Catholic church, whose building began in 1545. As in most Latin American countries, while the Catholic church did its best to convert the locals, they often retained their own traditions and merged them with Catholic beliefs and rituals. That is why it makes perfect sense to have Maximón surrounded by Catholic saints and Jesus. The belief in Maximón is as real as the belief in Jesus or any saint.

About 20 minutes after we arrived, there was a changing of the shaman and the first shaman gave up his seat as the second shaman began setting up. First, one of the young men (not Maximón’s handlers) tidied up all of the candles in front of both Maximón and Jesus and scraped up the wax that had pooled on the floor. Then the new shaman spent about 5 minutes carefully setting up the thin white and orange tapers in two rows in front of Maximón and one row in front of Jesus. Next, a woman who was the person receiving the shaman’s intercession for her health was seated on the plastic crate in front of Maximón. The shaman began pulling clothes out of a chest and purifying them with incense. He dressed the woman in two shirts, a suit coat, a blanket for around her legs, shoes and one of the two hats and scarves originally on Maximón when we arrived. Then the young man spent about 5 minutes waving incense around the small room. At one point it was handed to the handlers and they each waved it under their armpits, which probably was just good manners at that point. 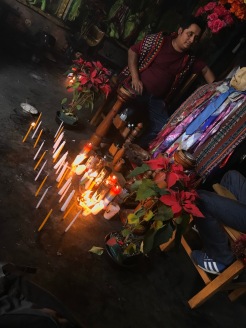 Preparing for the Ceremony 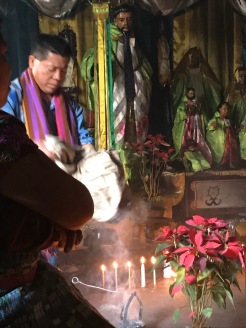 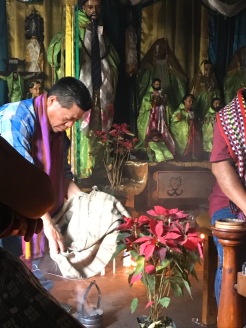 The ceremony began in Spanish and I recognized an Our Father, Glory Be and Hail Mary. I wondered whether we were going to recite the rosary when the shaman transitioned into Tzu’tujil. At that point we had spent about 40 minutes with Maximón and decided to take our leave. We walked with Francisco to the first Cathedral, and were amused to note that Maximón has a domed shrine kitty corner from the church and spends a night there between his annual move. We then hiked to the other end of town to a pleasant overlook and a very sad “peace park” which is actually a memorial to 13 locals who were massacred by the military government on December 2, 1990, during the last chapter of Guatemala’s civil war, which targeted the Mayan people and left 200,000 dead. 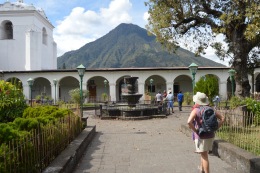 Mountain View from the Convent 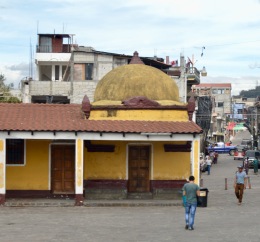 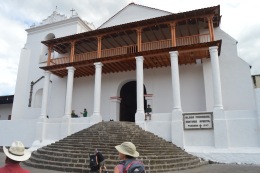 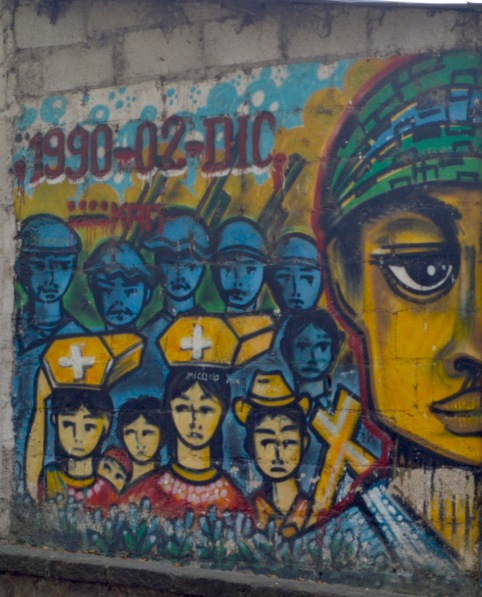 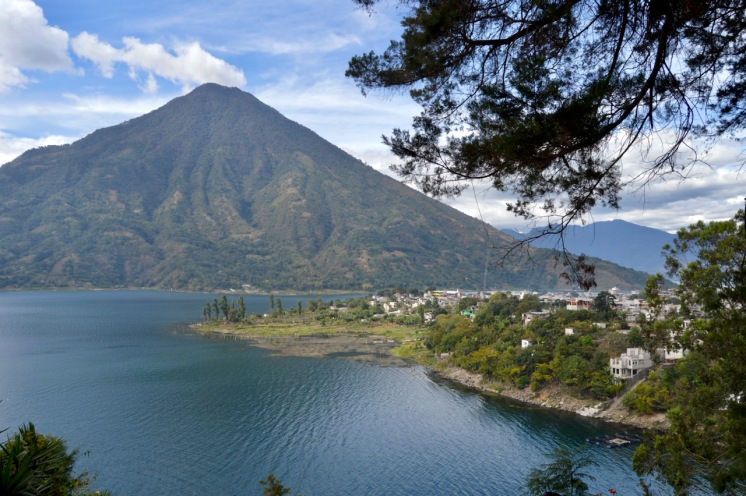 After some shenanigans with Francisco over the bill, we left him and walked back through town and to our hotel where we lounged for the rest of the afternoon and evening and contemplated the mysterious Maximón. 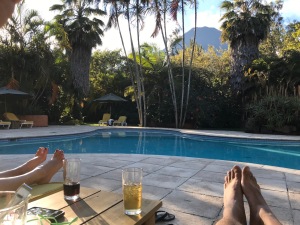 Cocktails by the Pool