One year ago today Matt and I and 17 suitcases/boxes arrived in Peru for our new life of international living. 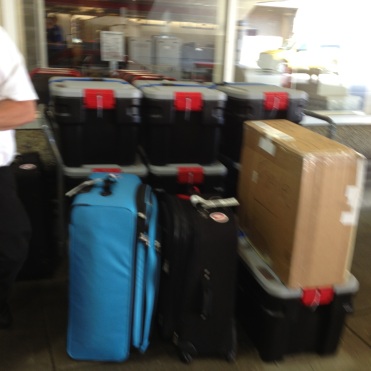 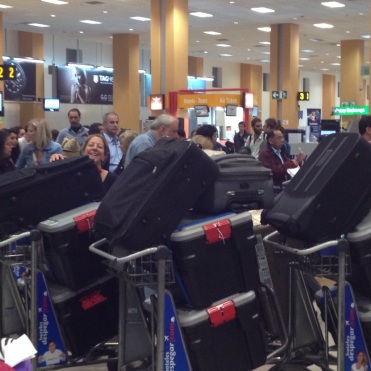 Getting through customs – Peru

While our new life has had its challenges, what has surprised us is how easy it has been to make the adjustment. We have both improved our Spanish and can navigate the basics in Peru with relative ease (sometimes even on the phone!), we have grown accustomed to livestock in the road and stray dogs everywhere, our opinion of acceptable cleanliness has been necessarily modified, and we have learned to live without some of our favorite foods and luxuries. While we miss our family and friends, with the internet and wifi phone it has been so easy to keep in touch that almost seems as though we aren’t missing out on anything. A far cry from when I lived in Italy 25 years ago and my only method of communication with anyone stateside apart from my parents (whom I was allowed to call for about 10 minutes every 2-3 weeks) was writing letters.

It has been wonderful to immerse ourselves in local culture by hiking in the mountains near our house, traveling within Peru, enjoying the food (with the possible exception of cuy) and celebrating local customs and traditions. We have made good friends – both Peruvians and other expats. Spending almost a month in Buenos Aries and taking a wine trip to Chile and Argentina were both spectacular. In short, we have made the most of this past year.

So Cheers! to our 1st Anniversary of our new ex-pat life. We wish for many more great international years to come. 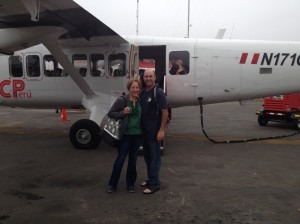 I jump onto most popular bandwagons late, and Facebook is no exception. But unlike the others, to which I wasn’t opposed, just disinterested until I was interested, I was flat-out opposed to Facebook. “I keep in touch with my ‘real’ friends. I don’t want to read what someone ate for breakfast, be annoyed by political rants, hear every day that someone loves her kids or husband…” my list was endless when someone would encourage me to join Facebook. “No one wants to read what I ate for breakfast, listen to my political rants, or hear I love Matt” was my next argument when the pressure would continue. When we moved to Peru almost a year ago, the pressure increased. But I was steadfast and I counteracted the arguments with this blog: everyone could keep up with my new life by reading my blog. And I could keep up with everyone else’s life via emails.

But that isn’t how it worked out. I learned that many people, even close friends and family (you know who you are), don’t answer my emails. Oh, I know that I have a lot of time on my hands these days compared to just about everyone else, but when those same folks are posting all over Facebook, but not responding to me, clearly time isn’t the issue. “Send a Facebook message,” Matt would tell me, generously offering his account for my amusement. And sometimes I would. And get an immediate response. This pattern deepened my Facebook boycott: if one has time to acknowledge me via one medium, why not another? Especially when both of the media are essentially the same.

Then there was the hypocrite factor. On more than one occasion, I asked Matt to friend one of my friends so that I could see her family photos and keep up with her life. As time passed and I missed family and friends more, I spent more time (usually late at night after Matt was in bed) cruising his Facebook account, seeing what I was missing and keeping up on friends and families’ lives. Sometimes I even commented or “liked” something.

So today I took the impulsive plunge and joined Facebook. And immediately panicked. For the uninitiated, or those who joined so long ago that you forgot, the minute you sign up for your account, Facebook has you send out friend requests before it even walks you through the profile page. I knew enough to not expose my entire contact list to friend requests, but within literally seconds of sending out the first, targeted batch of requests I received several acceptances and messages. Panicked, I called my brother, “I just joined Facebook, what do I do?” Tommy laughed, “I know. I just sent you a message.” “That’s my problem; I don’t know how to get my messages or set up my profile and I have about 20 “friends” already.” I realized I was ducking out of view of my laptop’s camera as if these “friends” could all see me. “Fourteen, not 20.” Oh. How did he know that? He walked me through the process and gave me some tips that I will likely understand at some point.

While I joined Facebook, that doesn’t mean I have fully embraced it. I still fear getting friend requests from people I would rather forget or ignore, getting sucked into endless hours of reading drivel, and not liking people I used to like once I find out their political or religious opinions. But I hope the tradeoff of seeing all those great pictures and actually getting responses from some of my friends makes it all worth it.

First mission accomplished – our 13 bags are all checked to Lima! Everyone’s well wishes, prayers and good vibes worked wonders as the experience couldn’t have gone more smoothly. The baggage agent was super nice and turned a blind eye to the few bags that were a half pound too heavy. What a relief to have that process done without any glitches! A big thanks to LeRoy for chauffeuring us to the airport.

Thanks to everyone for all of your well wishes, calls and emails over the past few weeks. Your support means a lot to us. Keep up the positive energy – we still have a long journey ahead of us! 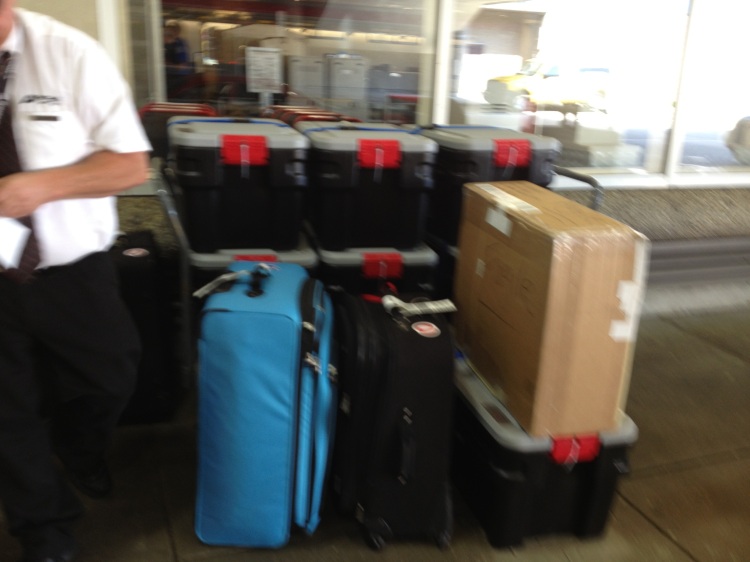 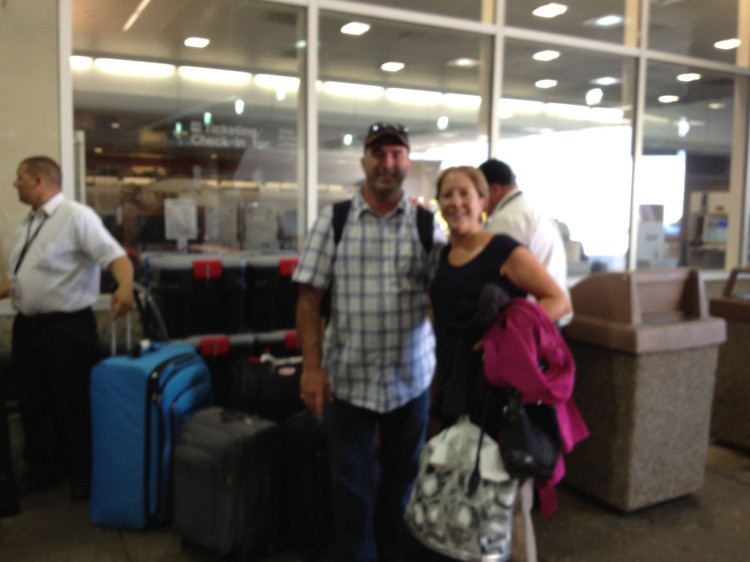 We ended our two week stay at the cottage  with our annual visit with the Arpins.  By great luck, Matt and his family were in Wisconsin from Spokane, WA, and they, along with Pat and Jackie and Tommy and the kids, joined us on Friday for some good family time.  The weather was perfect and we all enjoyed the lake.  Thankfully, while Pat and Matt kayaked, no open water rescue was needed this year! 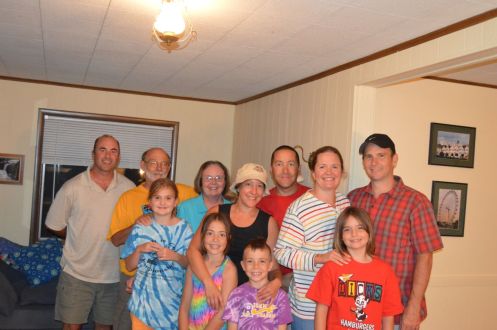 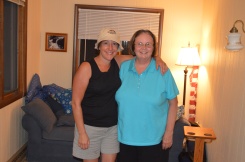 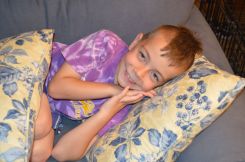 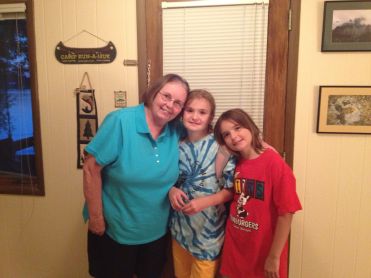 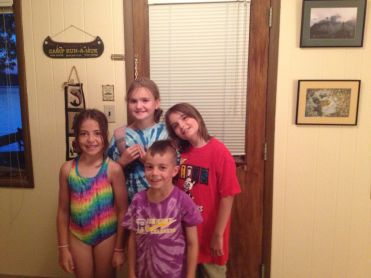 We left the cottage on Saturday afternoon and headed to Jen and John’s house.  It was odd not to have the cottage as a home base any longer and that made us feel a bit homeless despite many options for accommodations for our last two days.  We had a fantastic send off from the Geiger family even though John didn’t let me win at cribbage. 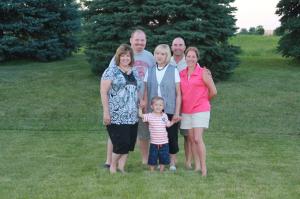 On Sunday we had brunch with good friends Angela, Ann and Tim and then headed to Tom and Sue’s for the Dwyer send off.  Per tradition, an Italian feast was our last meal before our departure. 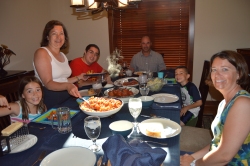 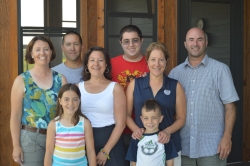 We are so excited to finally start our adventure after 7 months of preparation.  Sue’s dad is taking us to the airport and his van is packed with all our worldly belongings (okay, besides those in my trunk and at Matt’s mom’s and Tommy’s house).  Fingers crossed that the trip is a smooth one and our belongings arrive with us to Cajamarca!

Our first full week at the cottage was great. Getting here last Sunday was not- a full day of progressively more panicked packing, followed by a trip to Tommy’s to unload our boxes ready for retrieval on the 15th, and then off to sell the car. Our good friend Ann was waiting here when we arrived at 11:15 pm with stiff drinks and a very late dinner. Leaving Milwaukee knowing we no longer actually have a home there was a strange feeling.

But Monday brought a new perspective- peace. The hard part was done: our belongings were packed and everything in place for the move. So we celebrated with a round of golf and a day of relaxing on the lake. Tuesday was a work day- we watched four movies as we spent the day unpacking and organizing all of the boxes we moved to the cottage. On Wednesday we started entertaining family and friends and continued to do so through the weekend. The weather was great and we enjoyed lots of lake time and fun with friends.

This week brings a little different feeling- a week of lasts. Our last Monday here, our last round of golf for a year etc. It’s a little bittersweet but we still plan to enjoy every day and not dwell on the finality each day brings. If I can add the “first” of catching a muskie before I leave, the last week will be perfect!

We have said a lot of goodbyes during the past month.  For the most part, they haven’t been too bad – I will be home in September for a wedding and both Matt and I will be home at Christmas.  So most of the “goodbyes” are really of the “see you later” kind.  The more real goodbyes are those to some elderly relatives (because it really could be the last goodbye) and to the events that we will miss: the family St. Patrick’s Day party, Markesan June Dairy Days at our cottage, Lakefront Festival of Art, Milwaukee’s Irish Fest, etc. But saying goodbye to “The Lake” – my aunt and uncle’s home on Lower Nemahbin Lake – was the hardest goodbye of all.

My dad’s family rented a cottage on Lower Nemahbin since the mid 1950s.  Initially, the Hayburn sisters owned the property, but my uncle and aunt bought it in the late 1970s.  Regardless of ownership, from the 1950s – early 1990s it was a cottage with an outhouse and only a kitchen sink for running water.  And it was my version of paradise.  Despite the outhouse.  Despite the blistering hot upstairs where all the kids slept on the 5 old, saggy beds.  Despite the blood sucking mosquitos. The Lake was Wisconsin summers at their best -even if my family spent multiple cold, rainy weeks there for our only vacation of the year.  The Lake was family – the open Sundays when anyone could come out after noon is the sole reason I actually know a majority of my 56 first cousins.  The Lake was being a kid – lying on the raft all day with a book, playing board games and card games during the rainy days and catching fireflies at night.

The Lake is up for sale.  My childhood is truly over.

We leave July 15 for Cajamarca, Peru.  In the past 2 months we have:

While we made the most of these past two months, somehow the departure date has crept up on me.  Denial?  Probably, but that isn’t always a bad thing.  In this case, it allowed me to fully enjoy each day off and not have time with friends and family tainted by “this is the last time…” thoughts.  But now that our departure date is getting closer, it is hard to ignore the “last time” aspect of these experiences.  It also means that I can no longer put off packing, which I should be good at by now, but am not!  We started packing, but have a long way to go. 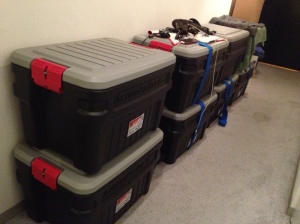 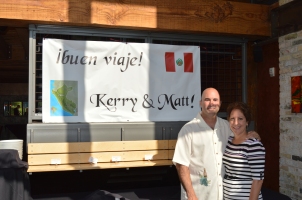 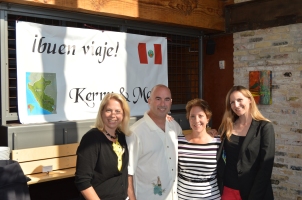 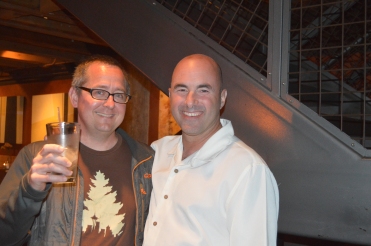 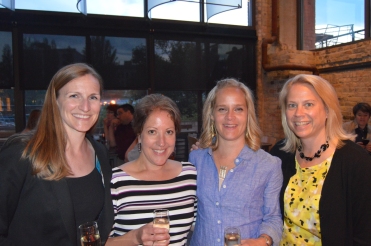 Our friends threw a going away party for us a couple of weeks ago, before people got too busy with summer activities.  It was a perfect send-off and reminded us how many great friends we have.  Given technology, staying in touch should be easy!