The main reason most people travel to the Colca Canyon is to see the Andean condors soar through the valley and we were no exception. While we enjoyed all of our trip: hikes, homestay, bird watching, hot springs, cave art and more, the main event was watching the condors. 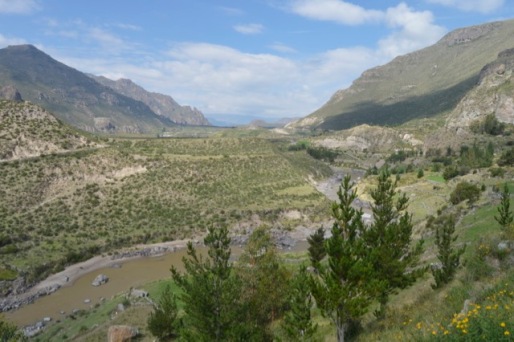 Back on the Inca Trail 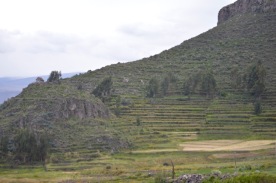 Hiking to the House

Farming in the Valley 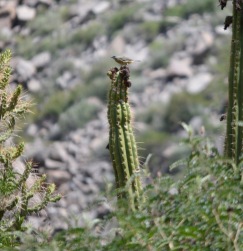 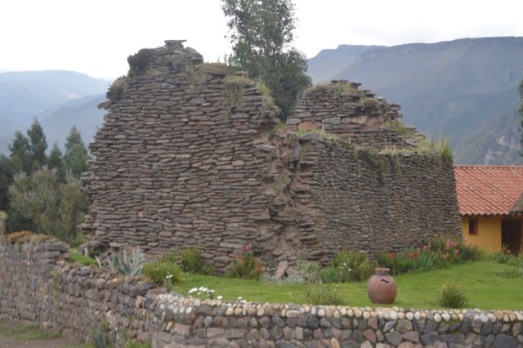 Headed to the Hot Springs 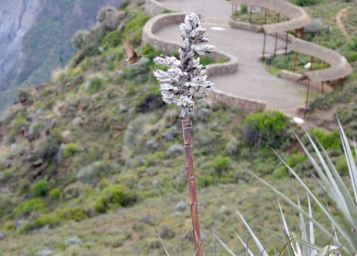 Our guide, Salome, planned the viewing perfectly: we left our hotel at 7:30 to travel to Condor Cross and arrived shortly before 8. Only a few tourists were gathered. The bus tours stay in a town farther away or come from Arequipa, so we were able to sleep in, if you consider getting up at 6:30 am to be sleeping in, and still arrive before the masses.

Chilly in the Mountains

Best Seat in the House! 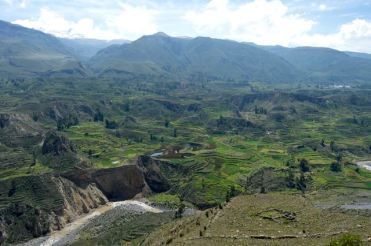 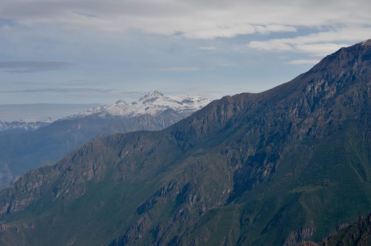 Salome quickly got us situated in a prime spot she had shown us the previous day and immediately directed our attention downward where 5 condors were gathered (we only spotted 4, but Salome leaned waaay over and saw a fifth). We laughed that none of the other tourists had noticed them and then nicely showed them where the condors were resting.

Condors at the Bottom; Salome in Pink at the Top

A Condo of Condors

And then we waited. And waited. We were now inundated with other tourists, but held firm to our prized positions. I bushed off some very rusty Italian and chatted with a friendly, Italian-speaking Swiss tourist. A hawk flew by and got us all excited until we realized it was only a hawk. Then one juvenile condor, followed by a second, took off and began soaring through the valley. It was breathtaking to watch them glide and drift through the canyon on the air currents. Eventually, the adult condors got in on the action and other condors also appeared to provide us excellent, live entertainment.

We Have Lift Off! 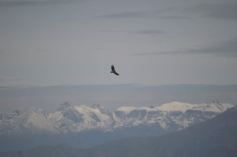 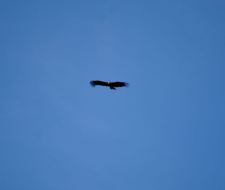 Hawk Pretending to be a Condor

High Above the Valley 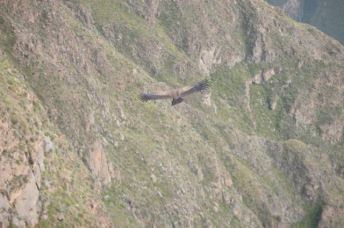 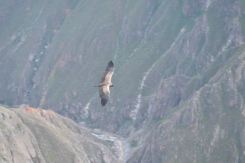 Tilting into the Current 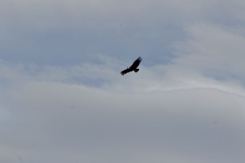 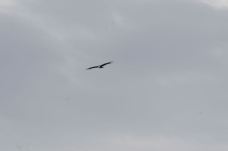 What goes up, must come down…

After about an hour, we started the short hike to the van. I was delighted with having seen 6 condors at that point, but on our return hike we saw another 8 condors. Every time we stopped watching to walk a bit more, another one or two would appear. We felt incredibly fortunate especially because the Belgians we met at the homestay only saw two condors the day they visited. Lilian later teased us and asked whether we would brag about how many condors we saw if we ran into them in Lake Titicaca. We did not see the Belgians again, so we were not tested.

Close to the Edge

Our Trusty Van Under the Rainbow 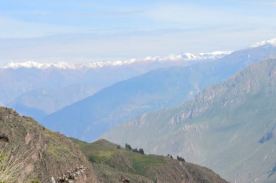 A View This Gorgeous Doesn’t Get Old!

Taking a Break from Looking Up 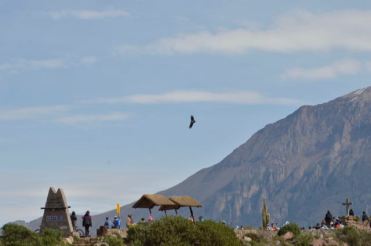 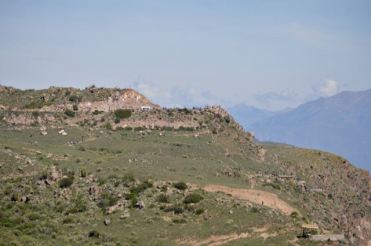 View of the Masses

Our day’s fun was not over. On our way out of the canyon we stopped in Maca to enjoy a colca sour  – a pisco sour made with cactus fruit (sancayo) juice. While I normally skip street food due to a sensitive stomach even after living in Peru, I wasn’t passing up a colca sour! Salome knows the owner, so we also got to see the skull of a family ancestor. They don’t know exactly who the person was but found the skull when tilling the family field. They named it Juan (I think) and treat it respectfully (if charging a small gratuity to see it counts as respect). Note his elongated skull of the Collaguas people.

Market for the Tourists

Maca was set up for tourism, something that gives me mixed feelings. On the one hand, I do not begrudge anyone from making a living, particularly from tasty cocktails, and if we can help drive a local economy, I am happy to do it. On the other hand, there is a fine line between sharing one’s culture and turning it into a tourist trap. Our homestay was a genuine experience, Maca was borderline and Lake Titicaca was the worst of its kind.

After our drink, we visited Santa Ana church. We had visited a handful of mountain churches on our trip, but after the grandeur of the Arequipa churches and monasteries, we were a bit churched-out. Maca’s church had been damaged in an earthquake but still retained much of its spectacular, gold-leafed interior. It also had an impressive display of statues, most with gorgeous embroidered clothing. Salome pointed out the indigenous and Spanish influences in all of these mountain churches. She also told us how the main statues used in processions would get new clothes every year and how families would try to outdo one another with the grandness of the clothing. 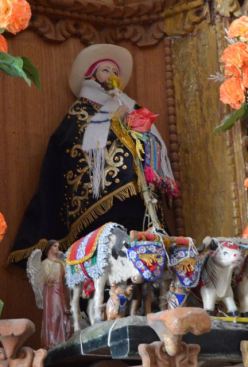 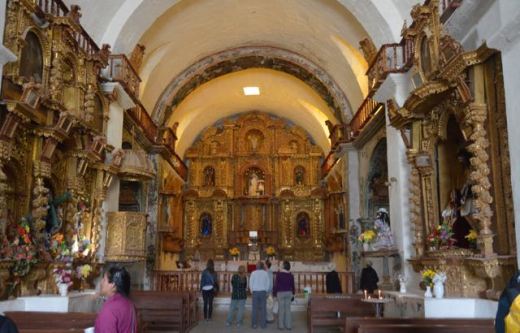 Finally, there were these crazy statues in the town square. 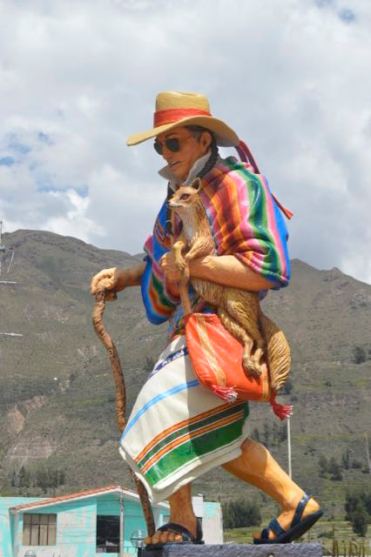 Salome tried to ask a local about the action-hero guerrilla on the woman’s back but all the man would say was that the statue wasn’t a correct depiction. When Salome asked what the proper depiction should be or what the folktale was behind the statue, he kept complaining how the statue wasn’t done correctly. Eventually she gave up, but Matt and I felt vindicated. We feel like we have these bizarre conversations often in Spanish and always attribute it to our lack of language skills. But no, sometimes people just spend a lot of effort repeating the same non- answer over and over again!

We left Maca and made our way out of the canyon with one final scenic stop to view the mountains. Then we were on to Puno on the banks of Lake Titicaca where Salome and Lilian left us to make their long drive back to Arequipa to be home in time for the obligatory elections the next day. What a great trip we had with them!

Pretty Lake in the Puno Region 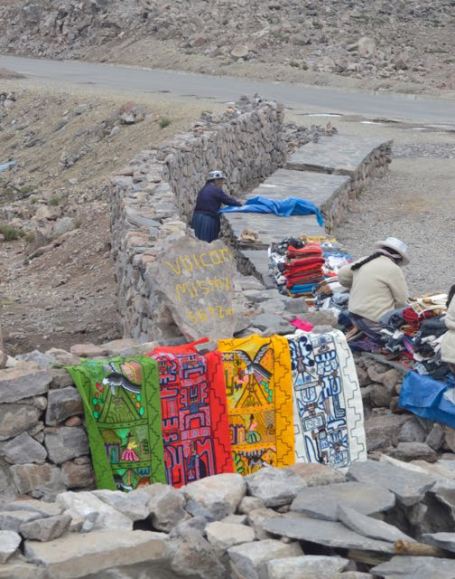 Can Always Buy Even in the Middle of Nowhere