A month ago, before our friend Jo returned to England, we went on a snorkeling day trip to Pinzón. While I enjoyed our bird watching trip to North Seymour island, Matt prefers snorkeling to bird watching and this trip was right up his alley because you cannot touch foot on Pinzón without a special permit. Instead this trip entailed 3 snorkeling stops around Pinzón and a visit to a beach on Santa Cruz. First step was taking a water taxi from the Puerto Ayora dock to the boat, the Contagious, which was no-frills compared to the boat from our prior trip. I was glad that I had popped dramamine before we set off as the seas were bumpy.

After about an hour and a half crashing through the waves, we arrived at our first snorkeling destination, a calm bay. Three penguins flopped into the water as we were disembarking but we never saw them afterwards. We jumped off the boat and started swimming. It was like we were in a fish tank. The water was crystal clear and everywhere we looked there were fish and more fish. While many fish were the same types we see at the beach near our house, they were much bigger in the deeper water. 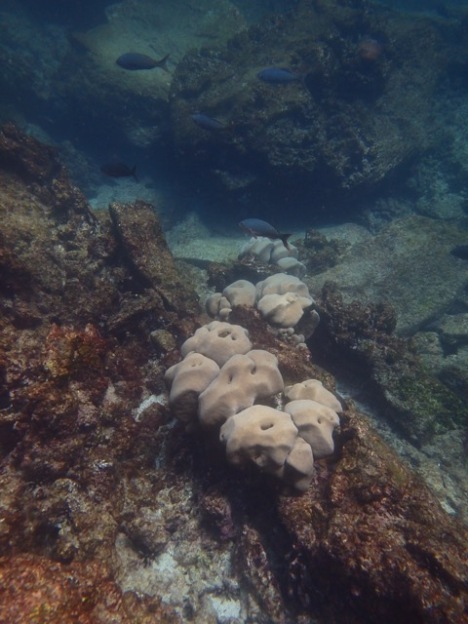 Striped Salema or Galapagos Mullet – Not Sure Which

Our guide (whose name escapes me) was a great guy who made sure we saw a lot. He swam with us and pointed out tons of things I wouldn’t have otherwise noticed. He also stirred things up at times… 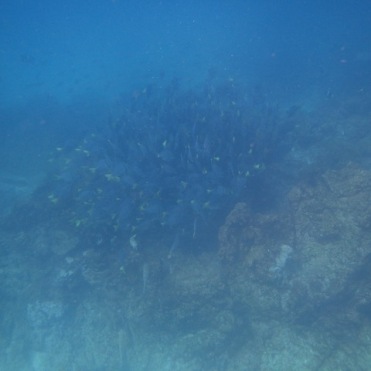 Next stop was in a deeper area with a stronger current. The fun continued. 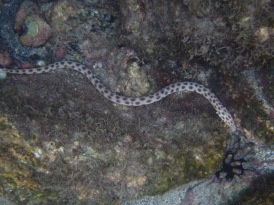 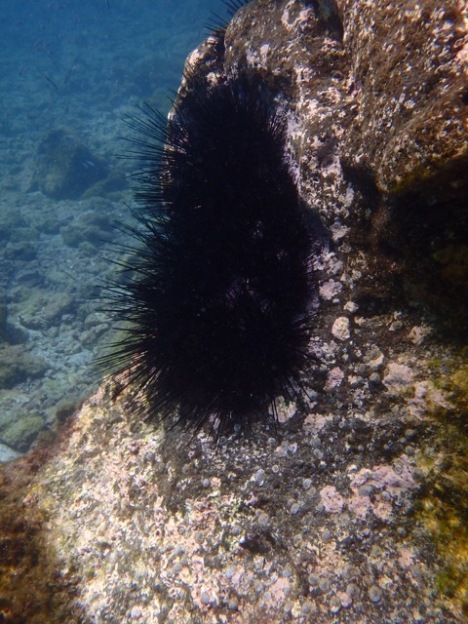 I hate snakes. Eels are simply snakes of the water.

Then Jo called me over. I thought it was to see a sea turtle, which I had yet to see. I was wrong.

Despite my fear, I followed this guy for awhile. Then I decided not to press my luck and went back to viewing tamer animals.

At this stop, Matt and I also had a baby sea lion playfully swim back and forth between us. Happily, we did not see it get eaten by a shark. 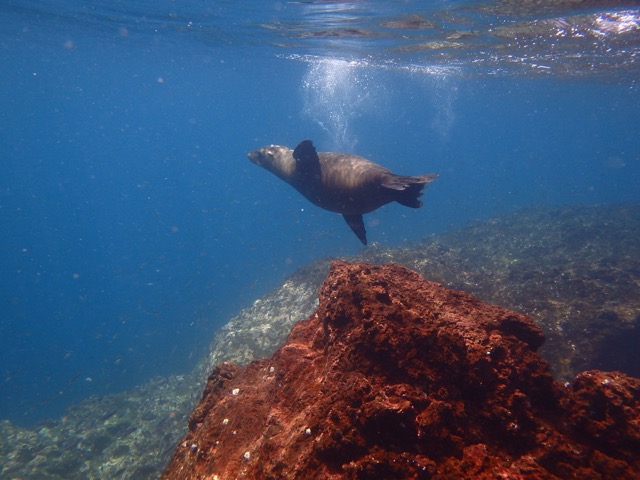 Our third snorkeling stop was equally spectacular. As I still hadn’t seen any sea turtles, our guide came and got me when he spotted some. He linked his arm through mine and we swam off after them. Fantastic.

Then it was shark time once again. Our guide woke up the sharks for our viewing enjoyment. Who the heck wakes up sharks?!

Headed Back to Its Crib

Our Fearless Guide Waking Up the Sharks

Strangely, being in a group and with a guide made me feel safer. Maybe someone else would look tastier than I? Still, I could only watch them for so long. As we continued swimming there was suddenly this big shadow below me in the water. I instinctively glanced over my shoulder to see what large thing was above me just as a realized that I was seeing a HUGE manta ray beneath me. Matt said he reacted the same way.  We agreed that its wings were 12-15 feet wide. It appeared to float away. Unbelievable.

On the way back to Santa Cruz, we swung by Daphne to check out the animals on shore. Highlights were the masked booby and fur sea lion. 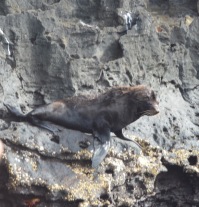 A fantastic trip and one I recommend to any snorkeler. Thank you Jo Browne for the awesome photos! An underwater camera is on the shopping list for our trip to the US next year…

2 thoughts on “Under the Sea: Snorkeling Trip to Pinzón”