We left Mendoza and flew to Santiago, Chile, where we had an afternoon and evening before being picked up by our guide, Pablo, and driven to the Colchagua Valley for more wine tasting. We saw very little of Santiago, but it felt like any other large city in a Western country. So similar that I had flashbacks when we stopped at the Starbucks in the morning to get a muffin before hitting the road and I saw all the businessmen (yes, only men) in suits having meetings or on their laptops. I don’t miss that life!

We did have time in Santiago for two very nice meals. The first was lunch at Bar Liguria. We got a bit confused walking there and I finally stopped and asked a friendly-looking woman where it was. She was so friendly that she walked us there. She wanted to practice her English, and I happily obliged. Who said city dwellers are unfriendly? We sat outside at the restaurant and had a lovely meal, despite some issues trying to translate the menu. Food terms are so regional that our Peruvian knowledge was no help beyond the basics. Beth and Chris have this amazing app that translates text before your eyes that we were using until we were informed the restaurant has a no cell phone policy. Oops! I explained we were just translating the menu and the waitress sent over a waiter who spoke some English, so we could put the phone away. After walking around a bit and then relaxing for a few hours at our hotel, we had dinner at Aquí Está Coco, a renowned seafood restaurant. The decor and ambience were great – in particular the restroom sinks made out of tree trunks – and the food was good. As it was a Tuesday night, the place lacked energy and the vibe seemed a bit focused on clearing the joint so the staff could go home. But we had a good meal nonetheless.

Pablo, the owner of Grado Sur Expediciones, picked us up on Wednesday morning and we headed to the countryside. Pablo was great – fun, interesting, and spoke perfect English, an added bonus. His company handles more active tours, such as mountain biking and kayaking, and our ride reflected it. 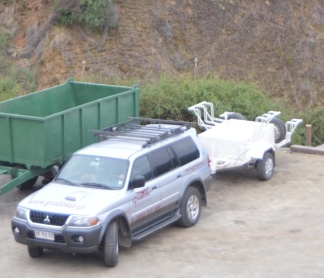 No need for the kayak/bike rack on this trip! But we were comfortable and it was good for the mountain roads (and our luggage). Pablo said that some of the nicer hotels give him the stink eye when he pulls up to collect guests, so we met him in the service drive at The W.

The fall colors in the Colchagua Valley were at their peak and grapes were still being harvested, so the valley was stunning. First stop was lunch at Viu Manent. Wow – the setting, the food, the wine, the service – everything was absolutely perfect.  We each ordered a different glass of wine and passed them around to have our own tasting. We didn’t tour the winery, but if I were ever in the area again I would definitely do the tour (complete with horse-drawn carriage) and have another meal there. Part of the attraction of the meal was that we were not limited to a set menu, as on our Mendoza tours, so we could have exactly what we wanted and each dish was a winner. 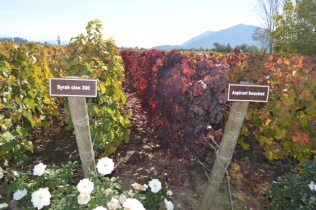 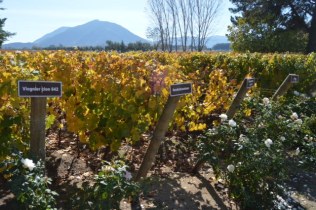 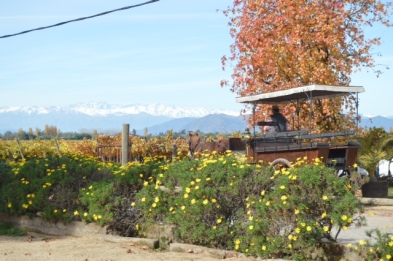 Second stop was the Laura Hartwig winery. Our tour was very nice, but we, and Beth in particular, were turned off by the winery’s label –  a prim picture of the now 83-year-old Laura back in the 50s. Very old-fashioned and it made us feel we were drinking wine with a aura of disapproval hanging over us. Really, check out her picture on the website and tell me if you think they could use a better marketing campaign! http://www.laurahartwig.cl/default.asp?id=52&ids=65. It was cool to see the barrels being filled and because our guide was so nice we bought a bottle of wine for us to drink with dinner that night. 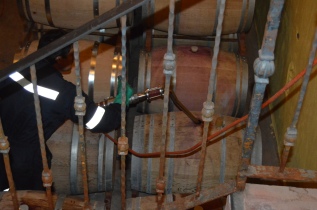 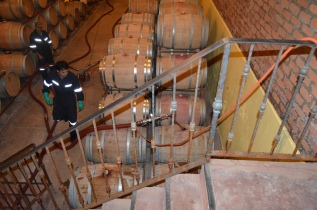 Barrels
Our final stop was Museo Colchagua, our only museum of the trip. It was quite interesting, with exhibits ranging from fossils to pre-Colombian artifacts to steam engines to the Chilean mine rescue in 2010, complete with the drill bits they used to drill the escape passage and the capsule that freed the miners. Had we not imbibed generous amounts of wine, we likely would have appreciated it a bit more. We decided on a simple meal that evening and bought cold cuts, cheese and a frozen pizza to have for dinner at our quaint inn, Posada Colchagua. The proprietess was very sweet and opened up her kitchen for us and offered us  bottle of wine. We were so over-wined, that we had to decline.

Day two started with a 2 hour drive through the mountains, instead of the 20 minute direct route to Viña Santa Cruz. For the record, I voted against it as I despise car rides, but I must admit that the views were impressive despite the fog. Even more impressive was the view from Viña Santa Cruz overlooking its vineyards.

Fog in the Valley 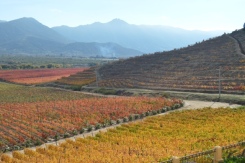 How Crimson Is My Valley

Our guide described Viña Santa Cruz as a tourism winery and that was certainly true. We took a gondola to the top of the estate where there were three mini museums, each devoted to a different indigenous Chilean culture: Mapuche, Aymara and Rapa Nui (Easter Island). It was very interesting and Pablo was an informative guide. His descriptions made all of us want to visit Easter Island. 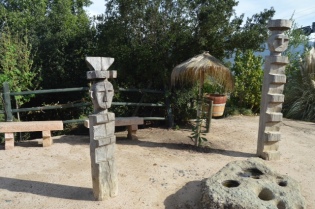 Mapuche Stairway to the Spirit World

After we descended our tour began and that is when it became apparent that wine is not the focus at Viña Santa Cruz. Our guide was impersonal and pedantic: he would ask us a question and stare at us until someone would venture a response. Usually he would tell us we were wrong with a curt “No!” I felt like I was in junior high and hadn’t studied for a quiz. Despite the $30 per person cost of the tour, we were only allowed to taste the cheapest wines they make. Pablo knew something was up when we left without buying a single bottle of wine.

We had lunch in Lolol, Pablo’s hometown, at a lovely local restaurant. We walked down the main street in the town and saw where the homes were destroyed from the earthquake in 2010. Much devastation and the rebuilding process is slow due to a lack of funds. 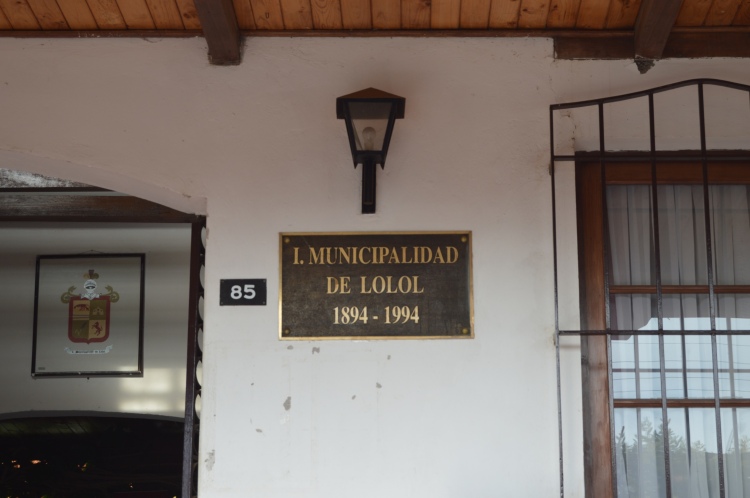 After lunch we went to Mont Gras for a tasting instead of a full tour. Our host Marcelo was animated and very generous with the pours, which included all the different price points of the wines. It definitely made up for our bad experience at Viña Santa Cruz and we bought wine to prove it! 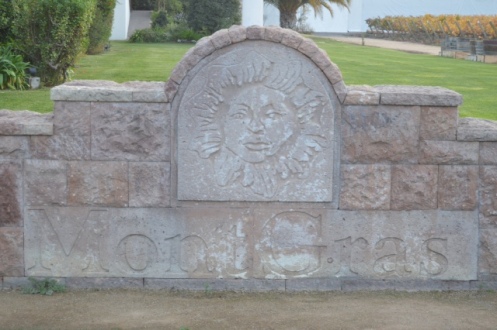 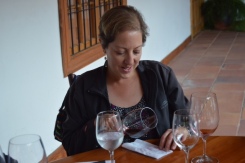 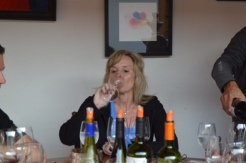 We headed into Santa Cruz where Beth and I walked around the market, yep, just like everywhere else, while the guys had a drink. Afterwards we headed to dinner at the lovely Vino Bello. Good wines, Italian food and service made for a great last dinner together.

Our last day together started with some excitement – an earthquake measuring 4.7 on the Richter Scale shortly after we arose. Matt and I had never experienced an earthquake before so we were a bit freaked out, particularly after visiting Lolol the prior day. To me it felt like a truck hit the building and then 4 waves came through that rocked me simultaneously up and down and back and forth. Very odd sensation. We found out later that an earthquake that small isn’t considered anything by those who live in the area and Chris, who lived in California as a kid, didn’t even notice it!

We went to the swanky Lapostolle Clos Apalta winery for our only tour of the day. The owner is the great-granddaughter of the creator of Grand Marnier and it was impressive to see what old money and a good distribution system can do for a winery! The winery is organic and biodynamic, the latter of which I don’t totally understand but it includes elements of mysticism, moon cycles and the like. The winery is intended to look like a nest perched in the mountains and it uses gravity (something we also saw in wineries in Spain) as the force to create its wines, with the wines moving down 6 stories during the process instead of being machine moved. The winery was impressive, as it should be given the US $10 million price tag. It was an excellent final tour for our trip. 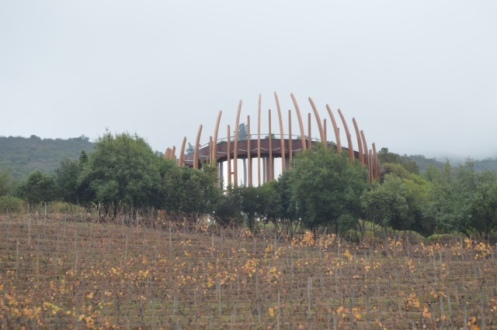 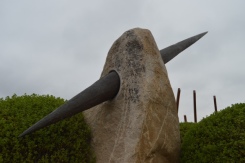 In the Bird’s Nest

As the Wine Flows… 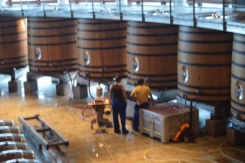 Bucky Along for the Ride 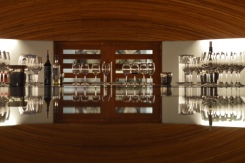 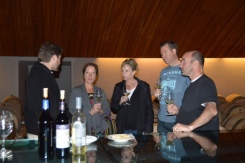 But just because our tours were over didn’t mean our wine shopping was! We stopped at the Montes winery for our version of a tasting (ordering wines and sharing) and a snack. It was another lovely winery; the staff was friendly and the wines were good. 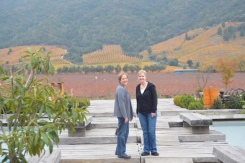 Friends Til the End 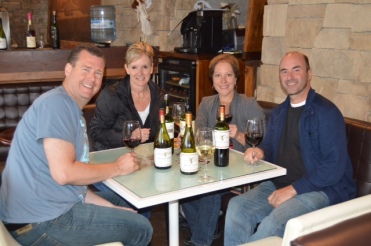 It was also interesting to see the fields being harvested. I made the mistake of saying “oh, those poor workers,” when I meant poor because they were engaged in back-breaking work while we were drinking, but I was mocked endlessly. Pablo’s brothers’ business is supplying the harvesters for the vineyards. We suggested they should also provide a wine shipping service as this was not available in the area as it had been in Mendoza.

Workers in the Field

Our final winery stop was Las Niñas, a winery owned by 3 generations of women, for the express purpose of buying their “high heel” wine per Pablo’s suggestion. Unfortunately, we learned that they had relabeled the wine because they felt it was too feminine and not doing well in the market. Clearly they were not shipping to the US where novelty labels fly off the shelves, particularly if the wine is good! Our final stop before the airport was a quaint restaurant where we had the best empanadas ever and sopapillas (fried dough) with honey for dessert.

We had just enough time to get Beth and Chris to the airport for their flight. Then Matt and I collapsed for the night – no dinner and no wine – before we returned to Peru the next morning. All in all, an amazing trip. Most importantly, all 5 1/2 bottles made it safely home!