Sunday afternoon Matt and I returned to Baños after spending the afternoon in Cajamarca and discovered a festival in our town square.  We checked it out and deduced that it had something to do with sugarcane.

Should a Drunk Guy Have a Machete? 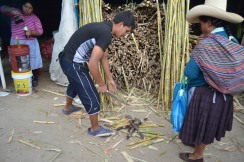 Like most things here, it was unclear whether the festival was winding down or starting up: some shops were closing while others were being built out of pails of cement, wood poles and tarps.  Today we learned that the festival had just begun and will last all week.  Apparently it draws the farm folks and is looked down upon as a lowbrow event, but we thought it was a hoot.

View of the Festival 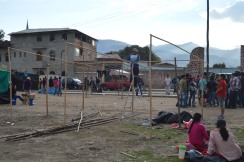 Our Wisconsin roots run deep and as soon as we saw all the fried fair foods, we decided to heck with intestinal distress, let’s eat!  Our first selection was a fried elephant ear type item with some sugarcane syrup (when asked if I wanted it sweet I answered with a big yes – I was going all in).  Matt then decided to have some sugarcane juice.  Well, I saw how those glasses were being cleaned and decided I was not partaking of that treat! 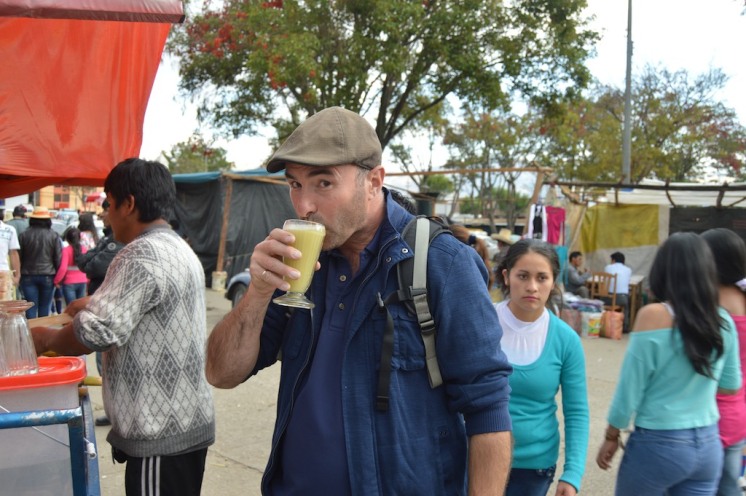 Instead I bought a package of cut sugarcane, which you chew to and then spit out the stalk.  Delicious, if not very ladylike!  We passed on buying the huge stalks of sugarcane as we do not own a machete.  We also passed on the sugarcane syrup.  While it was very tasty on our elephant ear, we now realize why the farm ladies root through our garbage for our plastic bottles.  Perhaps we can bring our own bottle to be filled…

These ladies were very friendly and I bought my cut sugarcane from them.

Back to the fried yumminess.  Matt ordered a papa rellena but wisely passed on the salad that accompanied it.  I had one bite and had to order

my own and even asked for the ají sauce to go with it.  I am becoming quite a fan of the pepper sauce.  A papa rellena is mashed potatoes that are filled with savory items (in this instance chicken, peas, corn and egg), seasoned with cumin and other spices, shaped into an oblong and fried.

We then bought some bread and cookies from this woman. 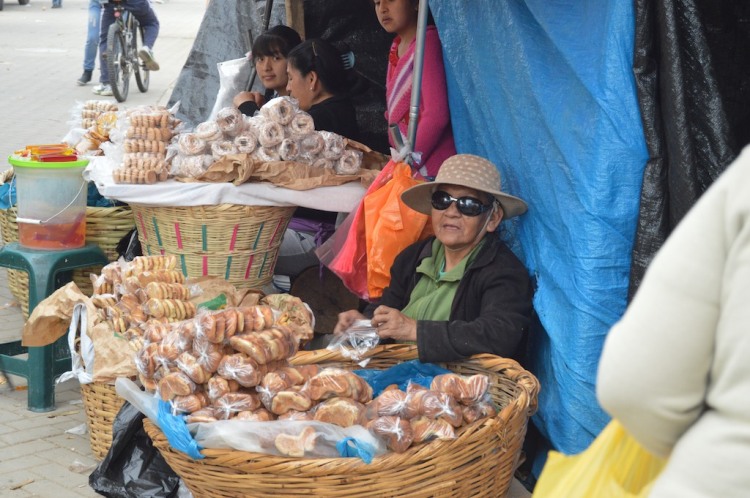 We ended it all with another package of cookies.  Those weren’t very good so we threw them out.  We came home about 7:00 but the fair lasted until at least 2:00 am, or at least that is the last time I woke up from the music.  Neither of us suffered ill effects from our unhygienic gluttony and we didn’t get around to having the cotton candy Matt wanted or the churros I wanted, so we may just have to tempt fate and go back to the fair this week.

7 thoughts on “Throwing Culinary Caution to the Wind”