The beauty about living in Peru is that we have plenty of time to see and explore to our hearts’ content.  As a result, we can deviate from our plans knowing that there will be another time to see or do what we originally intended.  It is a wonderful feeling and on Friday we put it into action with a fantastic result.

It was the Saint Rose of Lima holiday, which doesn’t mean a whole lot to us except that Matt didn’t have school (and no volunteering for me).  We wanted to get outside and enjoy the day and after some deliberation decided to walk about 3 ½ miles to a small town in the mountains, Llacanora.  There are also some waterfalls near Llacanora and we thought it would be fun to take a leisurely walk there, eat lunch somewhere and walk back.

We set off and were not disappointed.  10 minutes from our house we were on a road in the mountains.  The views were spectacular and the air was fresh. 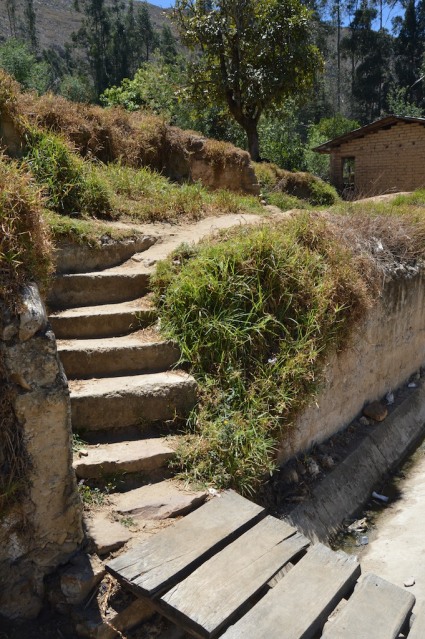 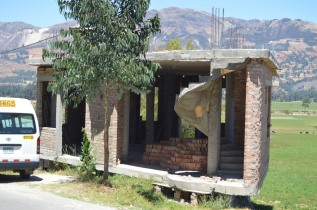 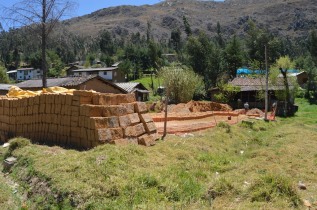 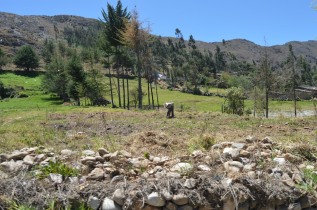 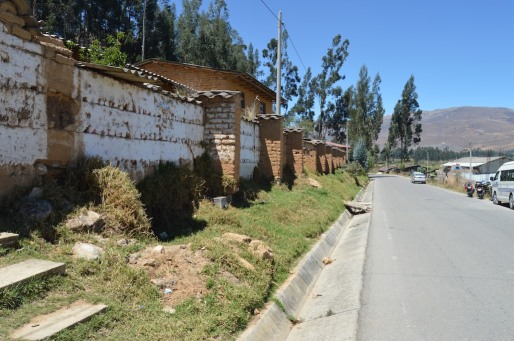 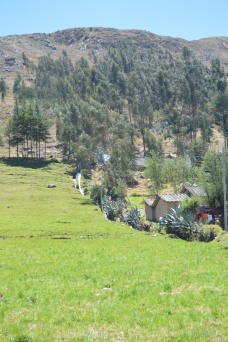 About 2 ½ miles into the trip we saw this sign: 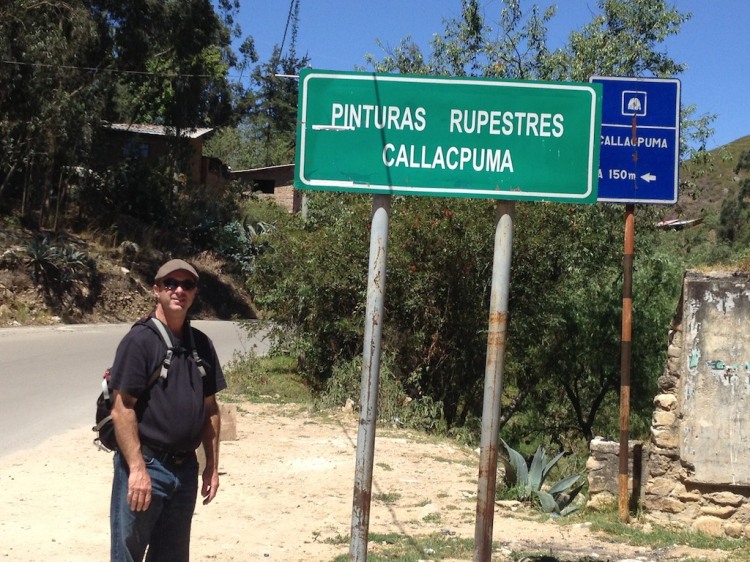 “Pictures, that sounds interesting,” we thought and decided that a 450 foot hike up the mountain was probably worth it.  There was a decent path and we quickly came upon a house where a hip-looking guy was climbing a rope spider web, which seemed quite out of place.  We greeted one another and then because the path looked unclear, we asked him if we were headed the right way.  He confirmed that we were and urged us to forge ahead and said there were beautiful views.  He and the woman in the yard were laughing, not in a mean way but in the “silly Americans” way, so we continued on. 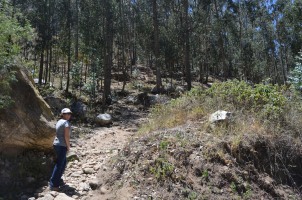 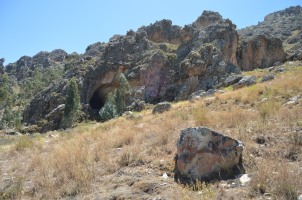 We realized that we didn’t know what we were looking for, so I did a quick google search and learned there are caves and ancient rock art on the site.  We hiked about and eventually saw some fantastic rock art that apparently dates back to between 8,000-5,000 BC.

The paths were hit and miss, but it wasn’t as difficult as the climbing at Cumbemayo.  After an hour or so of hiking we decided to head home so we would have time for lunch before our appointment with a new plumber.  (No surprise.  He didn’t show up.) But we will definitely return to this incredible site again, prepared with a picnic lunch and a full day at our disposal to explore the larger caves, which we never found. 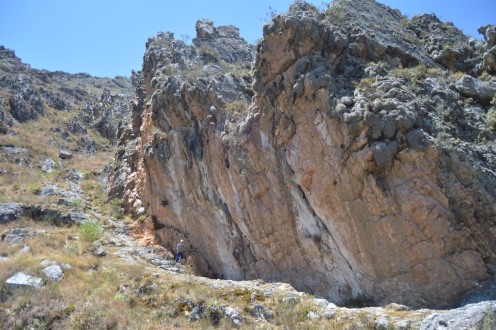 The End for the Day 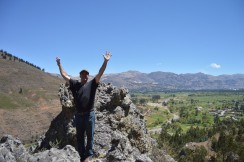 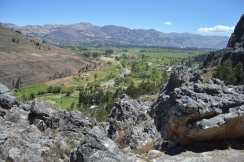 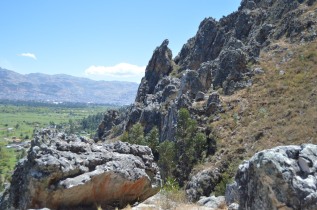 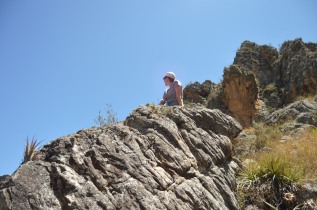 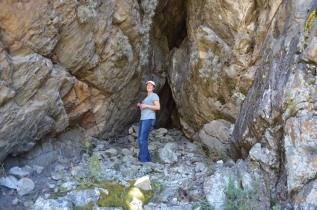 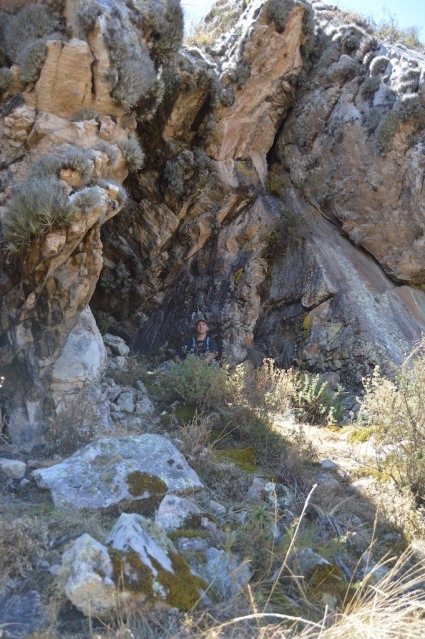 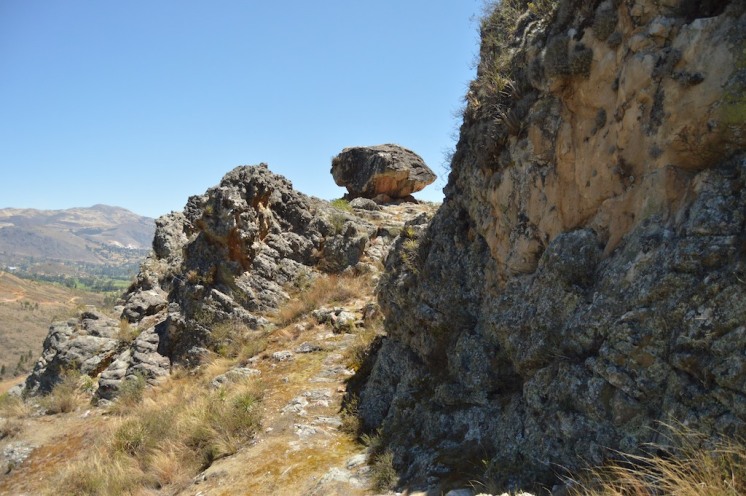 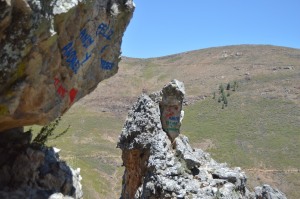 Once home I did some research on Callacpuma or Puma Orco (Puma Hill), but didn’t find a whole lot.  It is a designated archeological site and there is concern over damage being done to the pictures and people adding their own “rock art” to the site.  Callacpuma isn’t referenced in any of our guidebooks and doesn’t seem to be much of a tourist attraction, which makes us even happier that we found it.  The rock art extends over 3 square kilometers, so we have plenty more to explore.  I also researched whether pumas still live in the area as at one point we heard a noise that sounded like a big cat roar and I joked about mountain lions, not realizing the name of the site we were visiting.  This morning we had breakfast with Maribel and she told us the the place is considered sacred ground and most people go in March when it is believed the spirits don’t mind you are there.  She also said there aren’t any wild animals left in the area.  Perhaps we heard a Puma Spirit!