I was invited by a teacher at Matt´s school to go on an outing last Sunday. As she graciously insisted on collecting me at our house despite needing to take a bus to do so, Matt and I prepared an American bacon and eggs breakfast for Maribel and her 15-year-old daughter Nicole before we headed out. I ended up on a fantastic group outing to Cumbe Mayo, an archeological site about 30 minutes outside of Cajamarca. I did my research on Cumbe Mayo after I returned home and learned that it was a pre-Incan aqueduct built in approximately 1500 BC. Almost more impressive than the ancient feat of engineering is the natural beauty of volcanic rock formations referred to as “the Stone Monks.” The site also has petroglyphs, but I didn’t know to look for any on this visit. Next time!

Upon leaving our house, my adventure started with my first bus ride in Peru. Buses are really oversized vans and as we didn’t exactly know how they operate, we were too chicken to try one. I learned that the fare is 80 soles anywhere on the route and you pay when you get off. Because the bus was traveling too slowly and we were late, we hopped off and jumped into a moto-taxi, another first for me. We arrived at Maribel’s sister’s house (Yodi, short for Yolanda, I think) because we were going with Yodi, her boyfriend Fabi and her 6 year-old-daughter Kiera (pronounced in a Peruvian fashion that I never quite figured out) to meet some friends and head to Cumbe Mayo. We piled in Fabi’s SUV, stopped to pick up Maribel´s 13-year-old son, Kevin (named after the Macaulay Culkin Home Alone character, honest to god), and headed out of town.

Sort of. Despite the fact that Maribel and Yodi are native Cajamarquinas, they gave Fabi, who is from Lima, wrong directions. We were in a large SUV climbing winding, narrow streets to go up and over the hill to get out of town. We cruised around a corner, zoomed down a street, barely missing dogs and pedestrians, and Dead End. Fabi had to back up the SUV and honestly I am not sure we didn’t hit something on the way out. But he was an excellent driver and for all the near misses, I wasn’t fearing for my life. Perhaps I have Tommy to thank for training me as a passenger (if I yelled to slow down, he sped up. He got Mom´s car airborne and “buried the speedometer” on one memorable ride to teach me not to be a back seat driver! Matt should thank him.).

We made it out of the city and met up with a couple, a dad and young son and another guy. All very nice but I never managed to get anyone’s name. We set off on the country roads to Cumbe Mayo. The view was stunning the higher we climbed into the mountains and we ended at about 11,800 feet, which is 3,000 feet higher than Cajamarca. Nicole, like her mother, speaks very good English, so the ride went quickly as she asked me to teach her some slang (“no bad words!” decreed by Maribel) and looked at the music and pictures on my iPhone. I did get nervous when we pulled over and Yodi took the wheel. “She´s learning to drive,” Maribel explained. To us that would be learning to drive on the road to Pike’s Peak in Colorado! But I realized that this winding, rutted, dirt road with no guardrails probably is safer than learning in Cajamarca where driving is a blood sport. 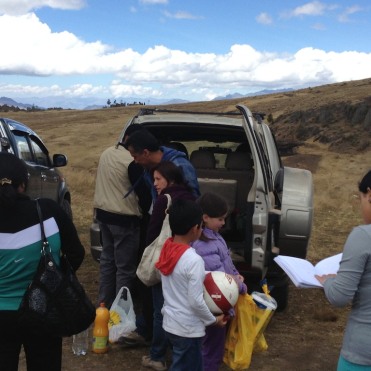 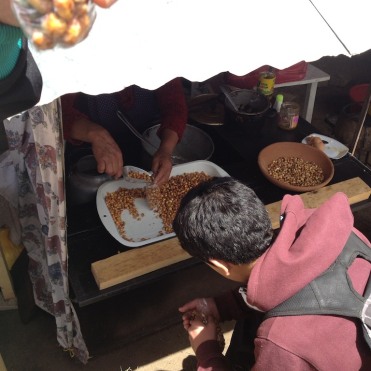 Our plan for Cumbe Mayo was to hike around, have a picnic and enjoy the day. And that is exactly what we did. The entry to the site starts with a descent down a path complete with stairs to the base of one of the rock formations. At that point you basically can wander around at will. There are some paths, but, as we later learned, you can also just forge your own. The path we initially chose quickly had us going though a very narrow cave. At one point it is completely dark, which is horrible sensation when you have no idea how big the cave is and are also worried about getting stuck!

Easy Part of the Hike

We all made it and hiked for about an hour or so before stopping for a picnic lunch at a big stone slab in the midst of a flat, grassy area. One guy joked that the slab was the site of ancient sacrifices, but perhaps he wasn’t joking given the history of the site. The men unloaded their backpacks and everyone set to preparing lunch: hamburgers, Peruvian style. Delicious rolls, pre-cooked patties (I tried not to think about how long these patties had been unrefrigerated as it was at least 3 hours by my count), lettuce, tomatoes and shoe string potatoes. The final addition is typical in Peru, as were the condiment choices, including several ajís. There were multiple kinds of fruit juices and mandarins as well. It was really delicious and the view and fresh air were wonderful. I didn’t even freak out over the stray dogs that circled us like wolves as soon as the food appeared. I could only follow about 50% of the conversation, but that was fine and it was a great way to improve my comprehension. Because this is Peru, the boy had a soccer ball along so our lunch site was perfect for the post-lunch soccer game (I watched), apart from all of the aqueducts that the ball kept falling into. 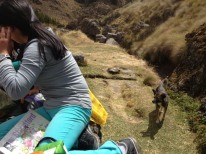 Eventually we set out again but after about 30 minutes the couple and Kiera decided they had enough of hiking and would wait for us while we ascended a peak. Once we hit the top, Fabi suggested we go “up and around” instead of backtracking. After much yelling down the mountain, it was determined that the rest of the party understood that we would meet them at the car. Our “up and around” adventure began. We went up and then started around, losing sight of the parking lot and our bearings. Eventually Maribel took control and led us in the direction of a woman with cows. By the time we got there, the woman and cows were long gone but two young boys were there. After much discussion, it was determined that we needed to go around a little more and then could descend. An easy task for two boys who live on the mountain, but more challenging for us. 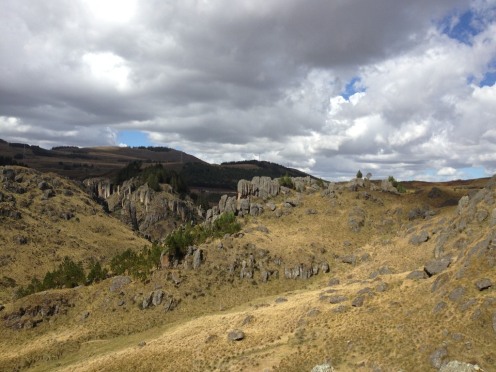 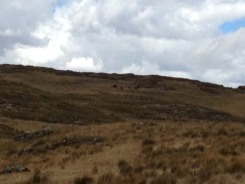 In parts the terrain was overgrown grass with holes everywhere. Yodi fell and twisted her ankle at one point, but thankfully could still limp along. Once that part ended we hit the precipice. After much observation and the realization that if we didn’t go down we were going to have to walk several additional miles around, we headed down. This terrain was mossy rocks, with grassy holes around the rocks. My thighs have just recovered from crab walking down! 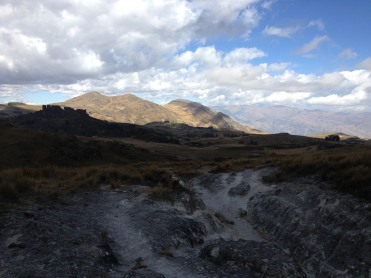 We all made it and after a terse discussion with a farmer whose field we needed to cross, eventually we hit the path and were back to the car park where the couple and Kiera were waiting. Everyone was tired so we said some quick goodbyes and headed home. The drive was crazy. Honestly, forget Mario Kart there should be a video game called Peruvian Roadkill. We had near misses with yoked oxen, cows, turkeys, chicken, sheep, dogs and pedestrians. All in all a great day! 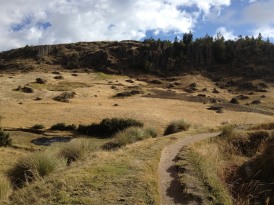 The Road at Last 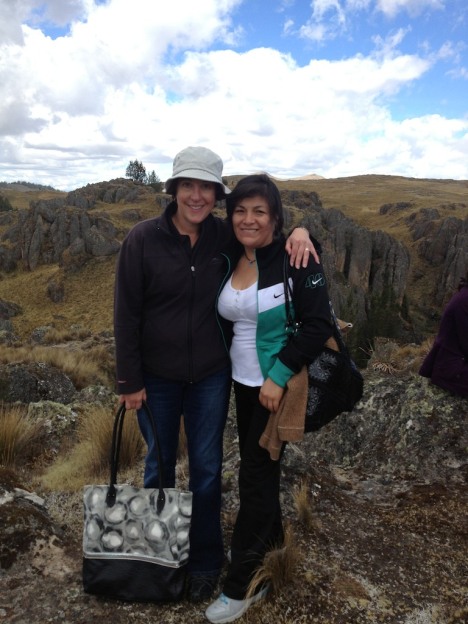 2 thoughts on “Picnic with Peruvians”