I love visiting archeological sites. I drive Matt crazy because I want to read and look at everything, but I find it fascinating to see the remnants of ancient cultures. Equally fascinating to me is that we often know little about such cultures or sites but that doesn’t stop the experts from positing all sorts of theories that they later retract. It’s like being a meteorologist – no one seems to care whether you are wrong. In 2001, Matt and I visited the Iceman of Bolzano and I was cracking up over the tale the experts had developed about the noble origins of ol’ Ötzi and told Matt that it was equally probable that Ötzi was a criminal and killed a nobleman for the fancy breeches in which he was found. Guess what became a prevailing theory a few years later? I’m still convinced that some researcher overheard me and stole my completely made-up theory to add to the mix. But I digress. 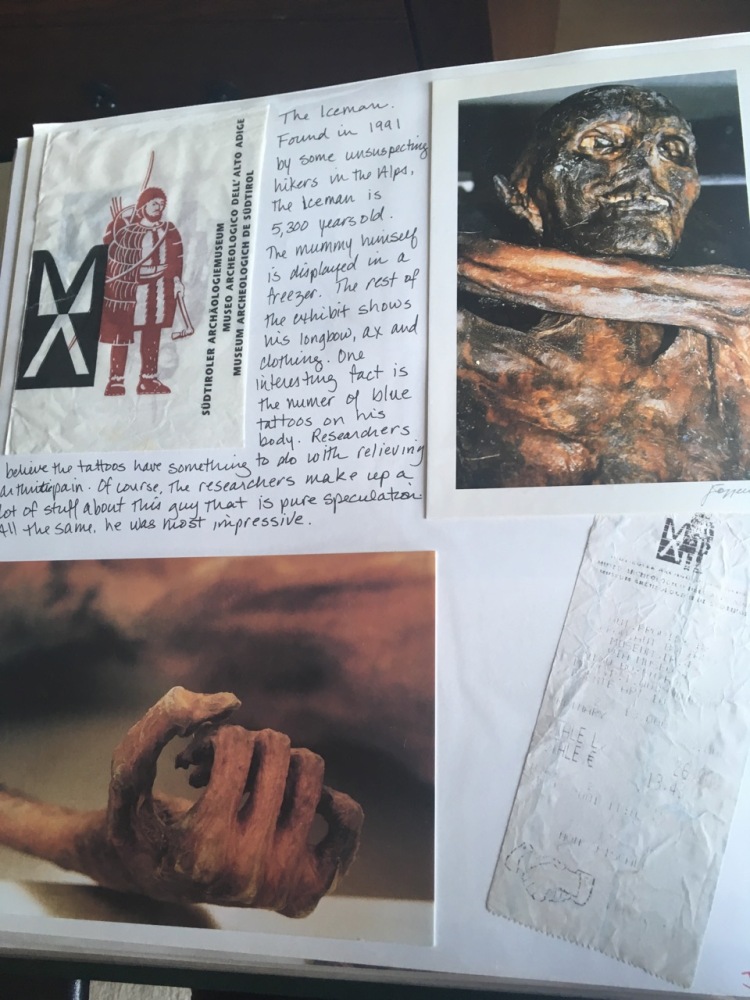 Teotihuacan is ripe for stories: an archeological site about 40 minutes north of Mexico City, no one knows who built and inhabited the city. The name is a Nahuatl one given to it by the Aztecs long after the city was abandoned; similarly, the names of the buildings were given by the Aztecs. The major buildings were constructed between 100 BC and 250 AD and it is believed that by the 4th century somewhere between 85,000-150,000 people may have lived there in an area that covered 8 square miles. (Note the huge variation in the population figures – The official site says up to 85,000 inhabitants while others claim up to 150,000 people. Ahh, to be an anthropologist!) If this is true, it would have been the largest city in the Western Hemisphere at that time, assuming there aren’t some other hidden cities we haven’t found yet or that were completely demolished. By 900 AD, the site was mainly deserted and many of the structures were burned. Differing theories attribute the demise to a class uprising or a war with outsiders. 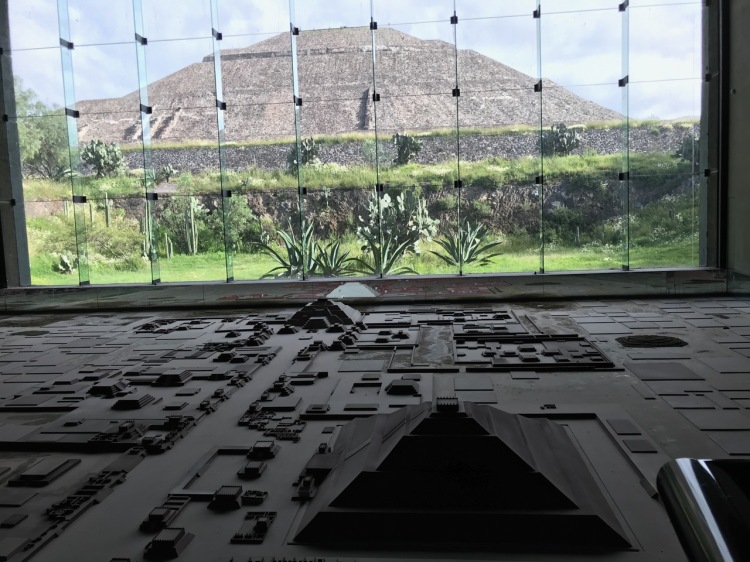 Teotihuacan Model with a View of the Sun Pyramid

The model sets out the town and includes buildings that haven’t yet been excavated. Regardless, the accessible parts are a marvel and we had great fun on our first visit wandering about with Beth and Chris. After a quick browse through the museum, we started at the Sun Pyramid. I had read horror stories about climbing it and while it was steep, it only took about 10-15 minutes to make it the 213 feet to the top. We appreciated the overcast day as we huffed it up the stairs.

Climbing with a Smile

Happy at the Top! 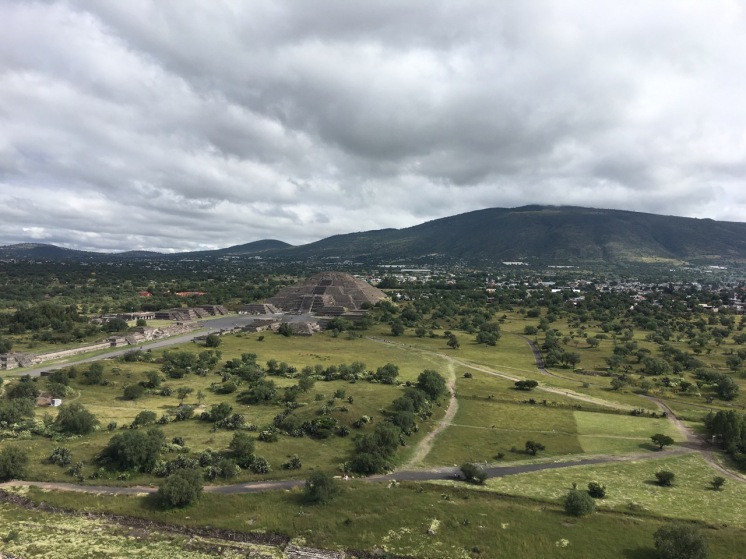 View of the Moon Pyramid from the Sun Pyramid

We meandered down the Avenue of the Dead to the Moon Temple. Along the way we checked out the Puma painting and the various buildings. We were short on time so we skipped the Citadel with the Temple of the Feathered Serpent (Templo de Quetzalcóatl), but Matt and I had seen a replica at the National Museum of Anthropology. 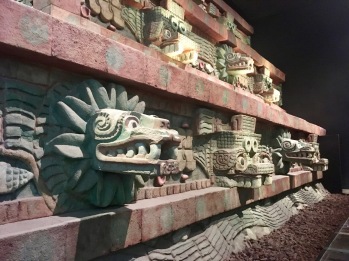 Reproduction of the Temple of Quetzalcoatl

I persuaded everyone that we needed to climb up the shorter Moon Temple, so up we went. The views were wonderful and we weren’t even allowed to climb the entire 141 feet, so it was a breeze compared to the Sun Temple.

Alive on the Avenue of the Dead 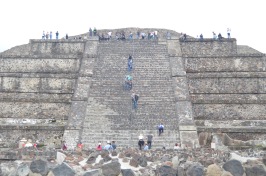 View from the Middle

Sun Pyramid in the Distance 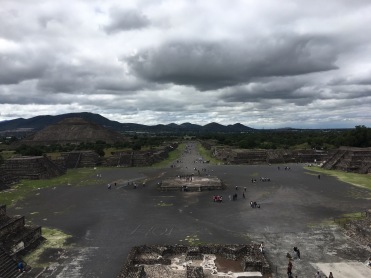 View from the Moon Pyramid 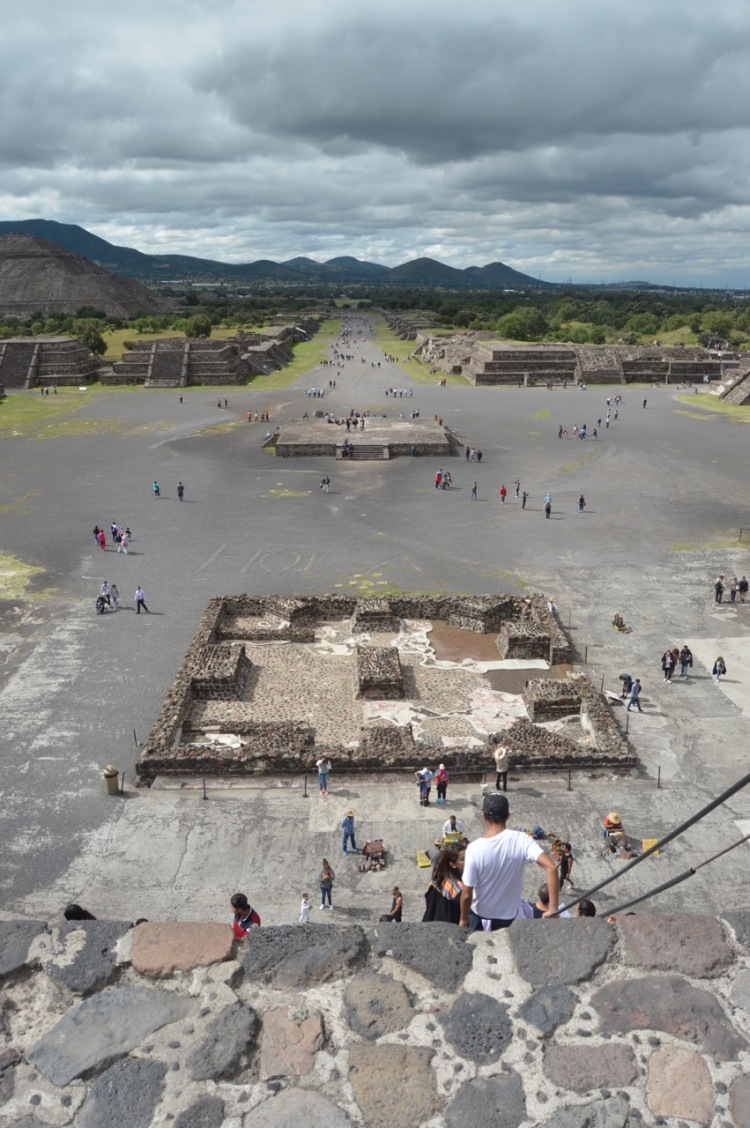 Avenue of the Dead from the Moon Pyramid

Our last stop was to the Palace of the Quetzalpapaloti and Patio of the Jaguars where we saw more frescos and some carved columns. 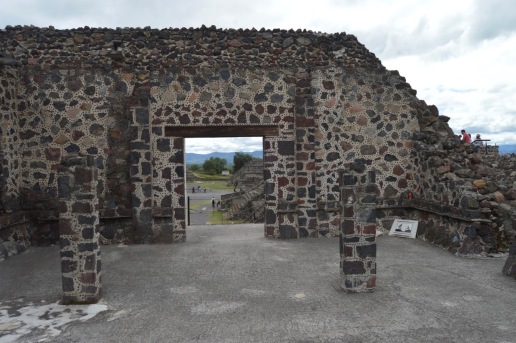 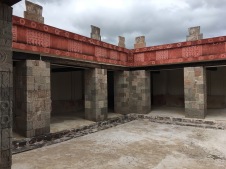 Courtyard of the Palace of the Quetzalpapaloti 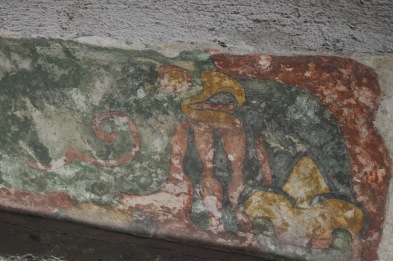 Matt enjoyed Teotihaucan, but wasn’t eager to return (because I would make him climb everything again). But when his school invited us to enjoy the nocturnal light show, even he was in. 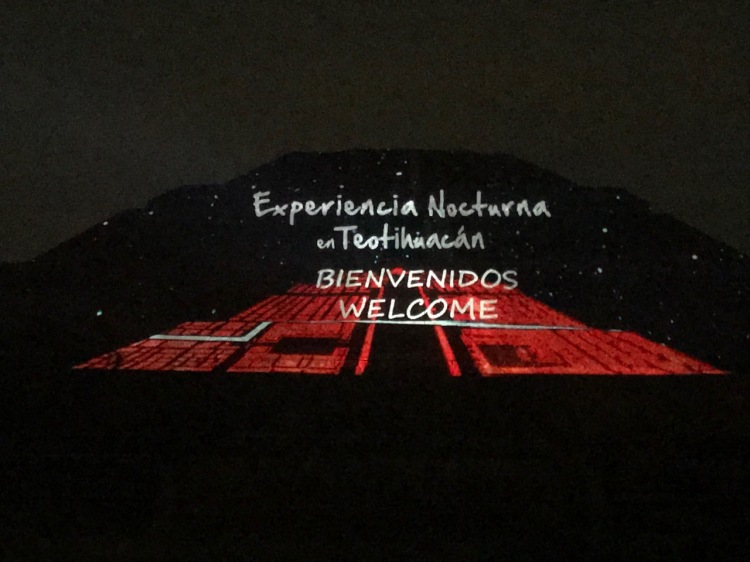 It was a spectacular night. They severely limit the number of tickets and keep everyone on a schedule. First you have a guided tour of the site and walk down the Avenue of the Dead. All of the buildings are lit up with changing colors. While you can’t climb any of the structures, it was an equally impressive experience given the lights. It was easy to imagine the area flooded with candlelight for some ancient ritual. After about an hour, we were all ushered to sit on the stairs to watch a light show projected on the Sun Pyramid. It told the story of Mexico and had some beautiful images and sounds. Unfortunately, not much could be captured on film.

Teotihaucan is an excellent day – or night – trip from Mexico City.