I lost my Carné de Extranjería, or Peruvian residency card, yesterday so now have to go through the process of getting a replacement card. To add to the pressure, Matt and I leave for Chile and Argentina next week, so I am anxious to get it replaced before our trip in order to avoid any problems at immigration when I try to leave or re-enter Peru. And you thought going to the DMV for a new license was bad!

To back up, getting the carné was a chore. To be fair, I suspect it is probably no easier for a foreigner to get a US visa. After filling out the paperwork, which thankfully Matt’s school’s attorney handled, I had to go to Lima to the Interpol office where I was fingerprinted, photographed and had my teeth inspected. Maria Katia, the school’s immigration attorney, guided me through the process and knew all the tricks and shortcuts, but it still was a few hours of lines and waiting. A few weeks later, on St. Paddy’s Day, I was summoned back to Lima to get the card. This process again involved several lines and a lot of waiting, but I left with the card in hand. Imagine my surprise when the clerk determined that I was a green eyed blond instead of a brown eyed brunette!

Yesterday, I went to run an errand in Cajamarca and specifically put my carné in my back pocket because I felt it was safer there as opposed to in my backpack. Wrong. Somehow, it was either picked (not likely) or fell out. After my errand, I caught a cab from the center of Cajamarca to the outskirts of Baños to get some exercise with a nice 3 1/2 mile walk home. So when I arrived at home and realized my loss, I walked the route two more times hopeful I would find my carné. I even mustered up my courage to ask two sidewalk sweepers if they found it and stopped at the police station to ask if anyone had turned it in. Apparently, it is not the culture to turn in a lost id (or anything, I guess) to the station. So they didn’t even understand what I was asking or why I would ask them.

After sending up prayers to St. Anthony and optimistically thinking that someone would show up at my door with my carné (no, it doesn’t actually contain my address) today I began the process of getting a replacement. Thankfully, Matt’s school is assisting me with this process. First, Julianna had to go to the National Bank to pay a $2.70 fee to allow us to go to the police station to file a report. Julianna and I then went to the police station with the receipt from the bank and relayed my tale of woe to the officer in charge. A young female officer got out a notebook and hand wrote the details of the loss in the book as the officer asked me questions (including whether I was married. That is always important on any document here and, in fact, Matt’s carné  initially was held up because someone had marked that he was not married). She switched between black and red ink; I never did figure out the rhyme or reason. At the same time, about 6 other male officers were in the office watching a soccer match. I signed the report and placed my fingerprint on it, another must in Peru as official documents always are signed and then your fingerprint added.

After an hour, I returned to pick up a copy of the official, typed report, signing and placing my fingerprint on the station’s original report. Actually, I found that part quite efficient; I don’t think you can get a police report in an hour in the US. 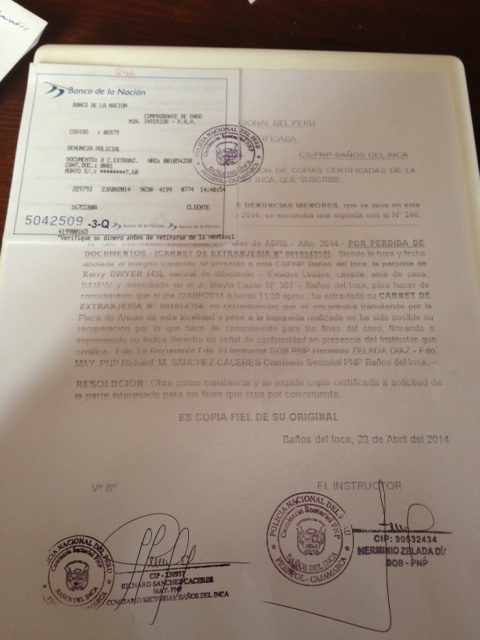 The school will send my copy to Maria Katia who will prepare the needed paperwork and secure an appointment for me in Lima with immigration. One of the big advantages to having Peruvian residency is that we get a huge discount to fly nationally. Unfortunately, because my card is lost and I can’t present it at the airport (even though my passport notes that I have residency status and I will have the police report) I can’t fly as a resident on this trip to Lima.  So instead of a $100 flight I will have a $300 flight, which actually is a bit of a bargain over the normal price for some reason. I am sure that there will be more endless waiting and long lines and several additional expenses, but I will be happy when my carné is back in hand!

So send your good vibes and prayers my way so that this process works as it is supposed to and that I have my replacement carné early next week!

9 thoughts on “An Expensive Loss”