I hate parades. I like the crowds, merriment and people watching before the parade, but I get bored silly sitting on the sidelines and watching endless streams of paraders. Until attending Markesan’s June Dairy Days parade became a cottage tradition that I was shamed into by my young niece and nephew, I had managed to avoid parades for a good decade. Then we moved to Cajamarca. There are parades for Saints, Patria (Independence), Carnival and endless other reasons, or so it seems. Because we want to participate in cultural events, we have gone to most of them. For Carnival alone we attended 3 parades, the paint parade and two “normal” parades.  We were under the impression that Sunday and Monday’s parades were distinct, but with the exception of some floats, generally carrying the barrio (neighborhood) queens and princesses, Monday’s parade wasn’t much different than Sunday’s parade. On Sunday, Matt, Mistina and I went to the parade early and managed to get a good standing spot near the beginning of the route. The vendors were hawking everything from food, toys, super soakers and plastic, hats and umbrellas to protect from the super soakers, balloons and pails of water that are customary at all of the Carnival events (including the burial of the Ño Carnivalón!). 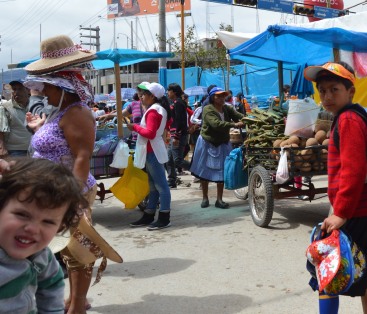 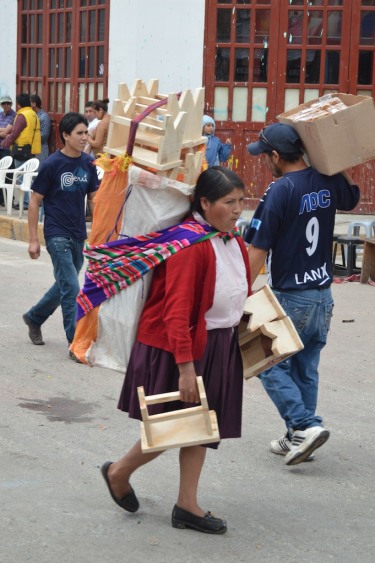 After waiting about 1 1/2  hours, the parade began and even I was impressed.  The costumes were fantastic and so different from what we have in the US (or at least at June Dairy Days).  The only major irritation was that despite staking our spot for 2 hours, we were battered by people shoving past us. We lasted at the parade for about 1 1/2 hours before I got bored. 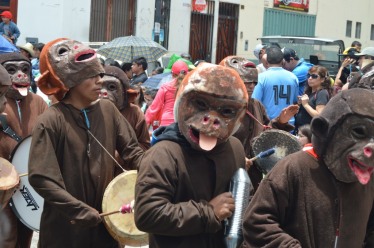 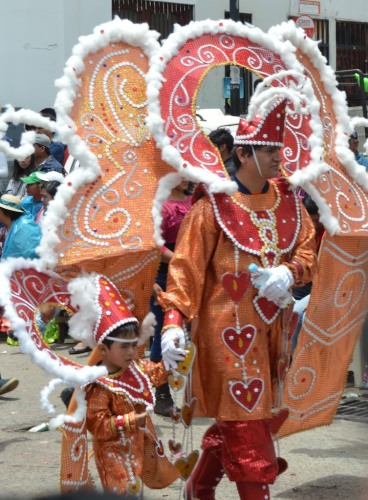 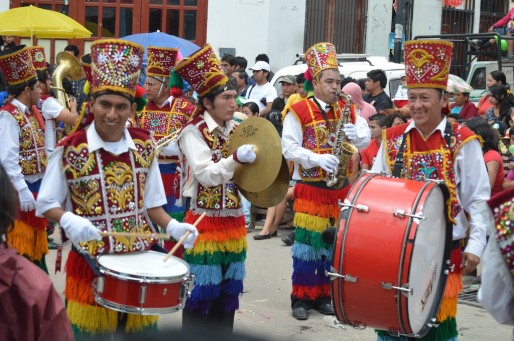 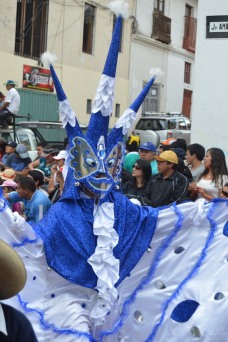 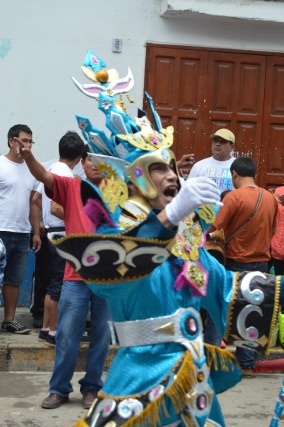 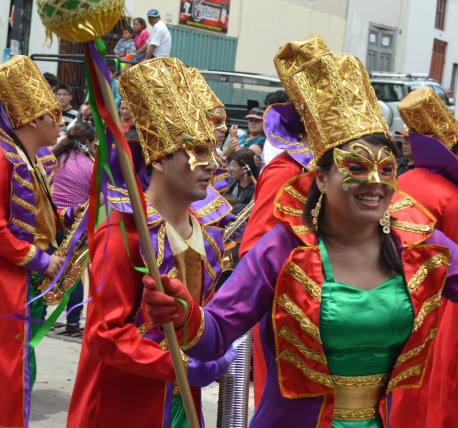 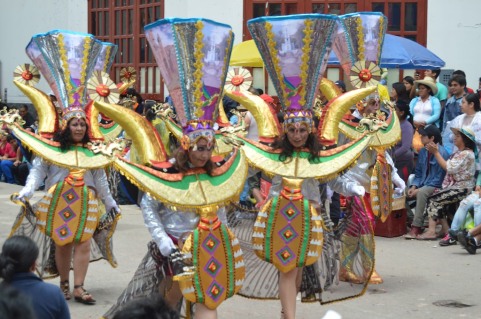 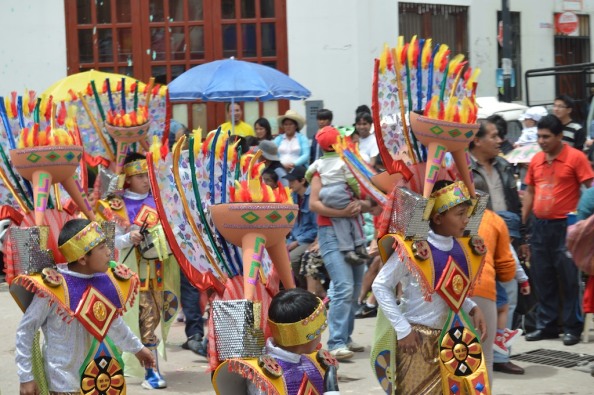 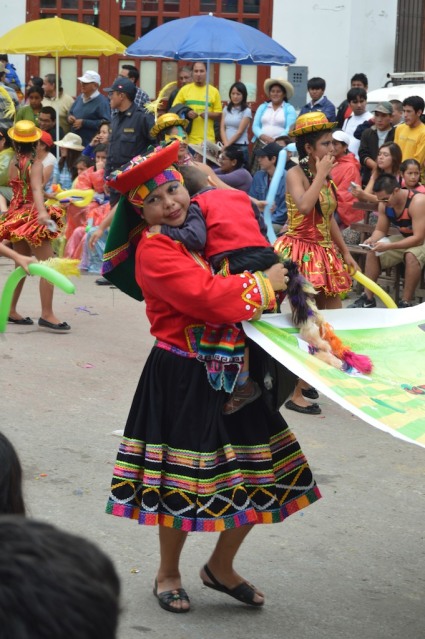 We then went to two teachers’ house for additional festivities that included throwing water balloons off the balcony at departing parade attendees. Note: there was major retaliation when a guy threw a bucket of water at us and then a flatbed truck spotted us and drove down our street to douse us with water. We also had the special treat of a homemade Cajamarquino meal: Chupe verde (my favorite herb soup with potatoes, egg and fresh cheese), chicharrones (fried pork), sweet potatoes, yuca, corn and delicious Peruvian condiments.  Dessert was fresh cheese with honey.  Delicious!  As if the food wasn’t amazing enough, we also had very pure cañazo, 14 year old beer and chicha de mani (a peanut based liquor) that had a smell reminiscent of Chinese food and an interesting smoky flavor. After eating, the karaoke machine was set up and we listened to our friends sing Peruvian songs. Then the dancing began and we got some salsa lessons. Honestly, I think Latin Americans are born knowing how to salsa; I clearly was not as I am usually thrusting the wrong hip!

On Monday we were off to another parade, but this time we were prepared. 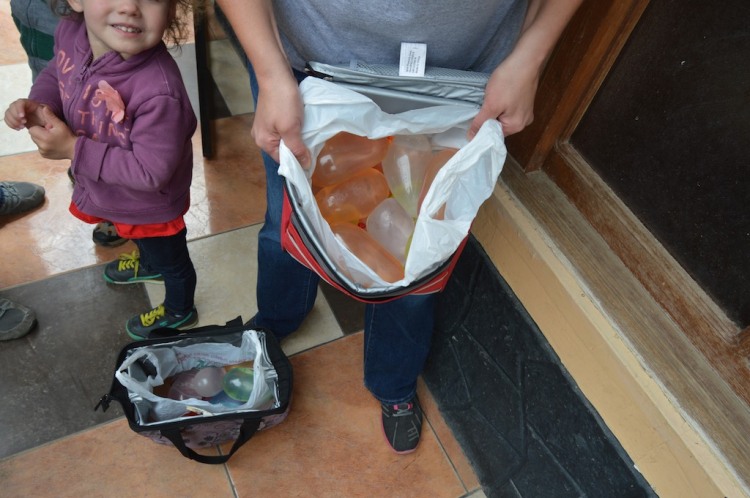 Mistina, Sarah, her 2 1/2 year old twins (Emma and Beau), Matt and I went to the parade route and after a block of scoping out the crowds decided that paying 20 soles each ($7.20) for front row seats was worth it!  Later we realized that a front row seat with a plastic roof might have been a better idea.  We were generally exempt from intentional water attacks due to Emma and Beau so we didn’t get to use our balloons as that would have prompted an attack that would have certainly involved the kids. 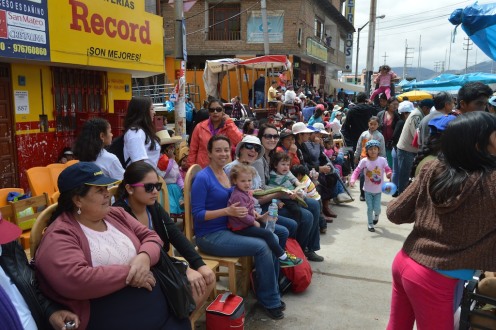 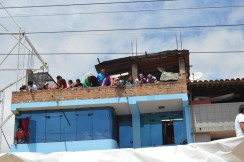 Girl in Hat – note the plastic enclosure she is in 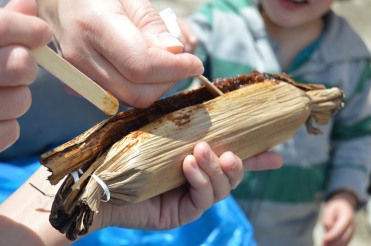 And then the parade began and apart from the floats and the fact that some of the marchers looked like they had been drinking all night (and probably were), it was just like the parade the day before!  We lasted about 2 hours (after waiting 2 hours) and then decided to leave.  Little did we know that leaving was not easy as access to the route is blocked off by viewing stands, makeshift structures, trucks and the like.  We walked several blocks before there was a small opening that we were able to climb through, with the help of many kind strangers, to get out. The parade lasted several more hours, so we were all happy we left when we did. Next year, two parades will definitely be my maximum and one might even suffice.

Note the kid in back! 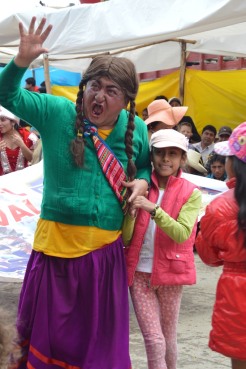 Everyone wanted a picture with this guy! 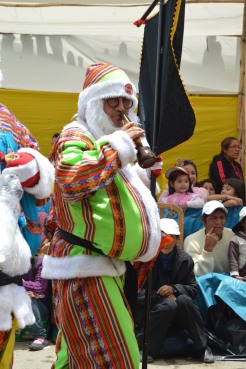 Today we have another Carnival Celebration: the Davy College Unsha.  A tree is erected and then you have a party to chop it down!  Last night we watched a tree get dragged down our street and then a few hours later Mistina and I walked down the block to see what the commotion was.  With the world’s dullest ax they were cutting branches off the bottom so that the tree would fit it into the hole in the middle of the street.  I was not convinced the power lines were safe so we left as they erected it.  Apparently these trees are “planted” in the streets all over the city!

One thought on “One Parade Too Many – Cajamarca Carnival Part 2”