Buenos Aires has so many great museums and other sights that while we saw a lot, we barely scratched the surface (a good reason to return someday).  Here are some of our favorite paid attractions.

1.  Museum of Latin American Art of Buenos Aires (MALBA)  An excellent modern art museum with many different types of exhibits, the MALBA is a beautiful space and organized well.  A definite must-see. 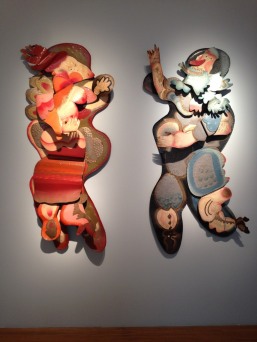 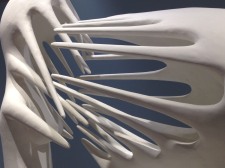 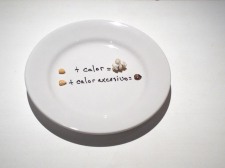 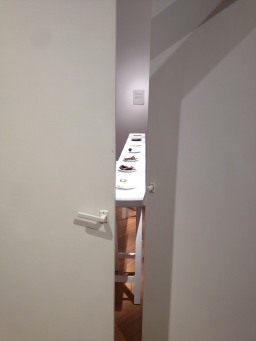 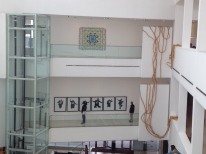 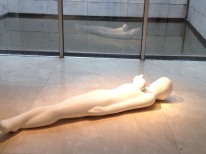 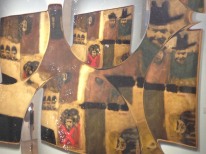 2.  Evita Museum  We had lunch in the museum cafe (amazing warm bread!) and then toured the museum.  The museum looks rather small and we expected to tour it fairly quickly, but it was very interesting with artifacts of various stages of Eva Perón’s short life, she was only 33 when she died, so we spent more time there than anticipated.  My favorite artifacts were her clothes and shoes (I was surprised by  her large shoe size!), but it was interesting to learn about her causes such as women’s rights and children’s welfare. 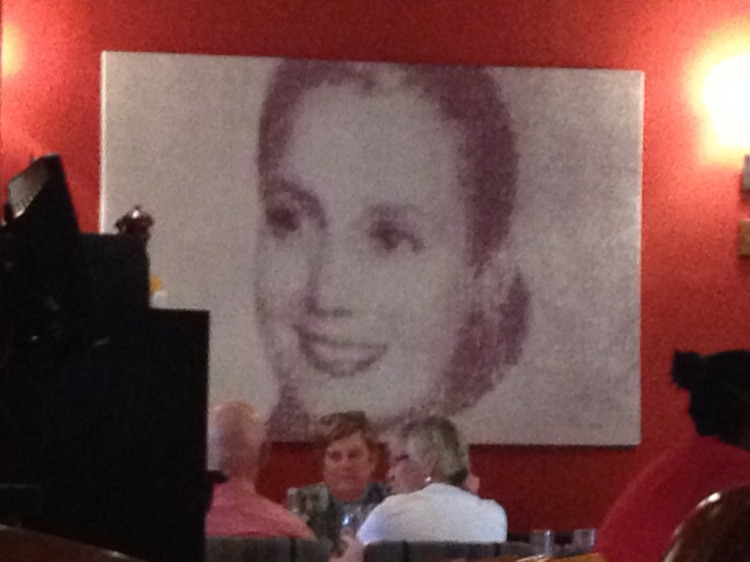 3.  Japanese Gardens  We actually went to the gardens with the primary purpose of having lunch at the restaurant on the grounds, but the restaurant was closed for the holidays.  The gardens were lovely, but incredibly crowded.  Matt thought this added to the authenticity of the experience as when we visited various gardens in Japan they were usually too crowded to enjoy the tranquility they were intended to inspire! 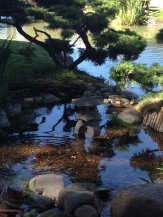 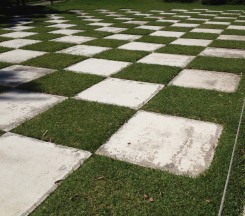 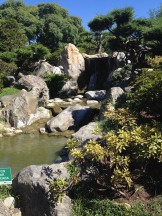 4.  Teatro Colon  One of my favorite sights in Buenos Aires, I would love to see an opera here some day (while Matt liked the theater, he was happy it was not opera season).  As our tour guide explained, the cost of Teatro Colon cannot be estimated as a building with these specific materials – the particular marble, windows, fixtures- can not be built today. The beauty of the theater is incredible and the English speaking Argentine guide was funny, entertaining and knowledgable as he kept our group moving at the prescribed pace. A few interesting tidbits: the Argentine opera audience is not shy and will hiss at singers who it doesn’t think meet the grade; there are separate entrances depending on ticket price and the materials and styles of the entrances reflect said prices;  and the lower, grated areas under the side boxes were the widows’ boxes where widows who wanted to see the opera but also were in mourning would have to sit to see the opera but not be seen. 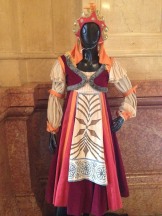 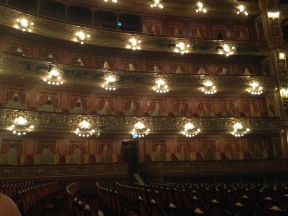 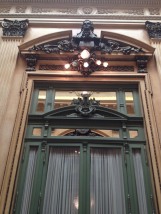 5.  Fuerza Bruta  Our entertainment wasn’t all high brow – Fuerza Bruta is a stripped down Cirque de Soleil. The audience stands throughout the show and is constantly moved to accommodate the staging. A mixture of song, dance, performance art, swimming, acrobatics and more, it was an exhilarating hour and a half for the bargain price of $14 a ticket. We didn’t even mind being jostled and having water sprayed on us, it was so fun! See Matt’s blog for some videos of the spectacle.  http://mattgeiger.blogspot.com/2014/02/fuerza-bruta.html

6.  Zoo  While the Buenos Aires Zoo is a bit shabby, it was quite charming with its old buildings and pleasant grounds.  We loved that these guys were freely wandering about and learned that the jackelope is really a Patagonian Mara (relative of the guinea pig, but apparently not eaten in Argentina). 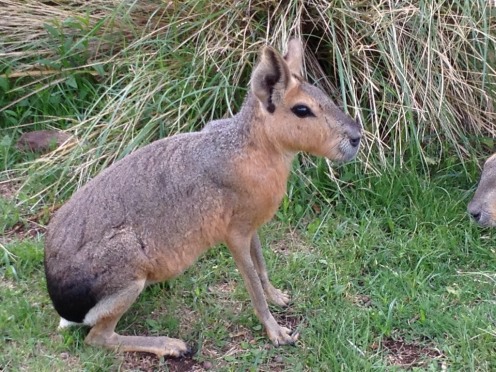 This is a great zoo for kids as patrons are encouraged to buy the special pellets in order to feed most of the animals.  So like the old days at Milwaukee County Zoo, you can see elephants and bears shamelessly begging for food. The enclosures also allow the patrons to get fairly close so you can get a good look at the animals.  Yes, zoos have their negatives and it is always a hard to see the animals captive (well, except for the huge, Amazonian snakes.  I was happy they were captive and still almost threw up looking at them), but if you can put that moral issue aside, it is a nice place to spend a few hours. 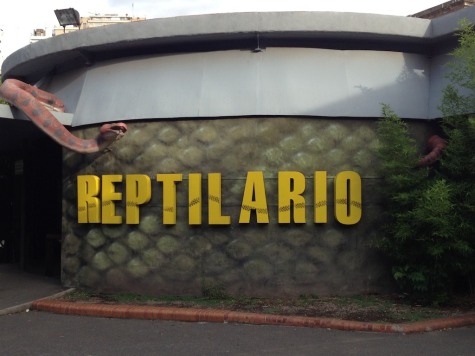 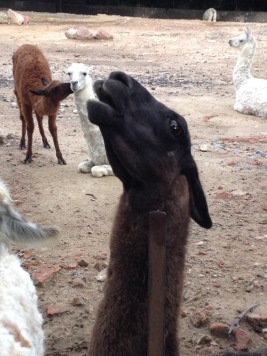 Not sure how he is getting out… 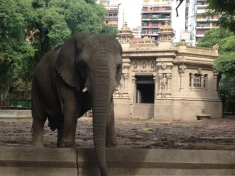 7. Xul Solar Museum We really know nothing about Argentine art but Matt read about this museum and thought it sounded neat.  I thought it was cool that the artist changed his name from Oscar Agustín Alejandro Schulz Solari to Xul Solar (note that Xul is Lux backwards, so his name means Solar Light).  In addition to being an artist and sculptor, Xul was a cosmic dude, interested in astrology and reincarnation.  He invented two languages, tarot decks, a mystic game of chess (apparently the board was larger and the rules could change as the game was played) and created a new piano with 3 rows and colored keys.  The museum is small, but interesting.  Because the museum was set up by Xul’s widow and followed Xul’s design, Matt questioned just how famous Xul was if he established his own museum.  But then we saw his works at other museums and some pieces are traveling around the US as part of a joint exhibit of Xul and Jorge Luis Borges’ (writer) works.

8.  Buenos Aires Museum of Modern Art  (MAMBA) This museum doesn’t really deserve to be on the list as we didn’t care for it much; the collection was limited and not well organized.  To be fair, two of the exhibit floors were under construction so it may be more impressive when those are accessible.  And while it normally charges a fee, we happen to go on a free day so it wasn’t all bad.

9.  Fortabat Museum  We were a bit disappointed when we began our visit as you are first directed to the family gallery and with the exception of the Andy Warhol painting of Mrs. Fortabat, we weren’t too interested.  (Aside: if you own your own gallery, you can put your niece’s substandard work in it too!).  But once we got to the lower level, the quality improved immensely and the artwork was amazing.  My favorites included a fantastic painting of Venice’s Bridge of Sighs, a View from the Empire State Building and a Tower of Babel.  The top level has functional art: bikes, chairs, coat racks etc., which while not of great interest to me, added to the uniqueness of the collection.

10.  The Beatles Museum While the Fab 4 never made it to Buenos Aires to the best of my knowledge, the Cavern Club complex pays tribute to them in style. Created by a Argentine whose Beatles memorabilia  earned him a Guinness World Record for having the largest Beatles collection, the small museum is packed with items ranging from albums to figurines to bubble gum to condoms (John and Yoko label, not the Beatles).  The collector doesn’t appear to play favorites and the solo work by each of the Beatles also gets a nod. 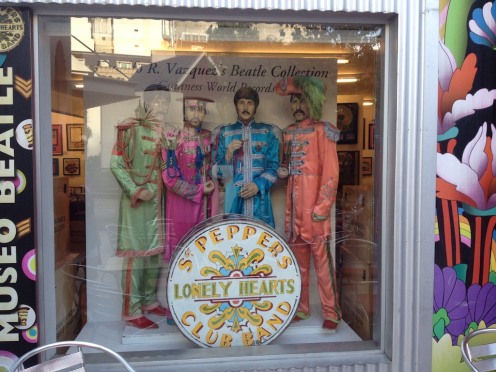 11.  Proa  This museum located in a really cool building in Caminito does not have a permanent collection.  We were fortunate enough to see a fascinating Ron Mueck exhibit that was life-like sculptures of people apart from the scale (they were either big or little, but never exactly right).  The exhibit also had a film that showed him and his staff creating the work.

Wow, when I see all that we did on vacation, it is no wonder we were happy to get home to Cajamarca!

One thought on “Buenos Aires: Evita, the Beatles, Opera and More”