First, my apologies for the lack of posts in the past few weeks.  We went out of town (stayed tuned for posts on Huanchaco and Truijillo), I painted our bedroom (never again) and we have had more social/school events to attend. Matt and I both have stepped up our Spanish studies, supplementing our weekly lessons with watching Destinos, a cheesy miniseries designed to teach Spanish to Americans, and Duolingo, an on-line language learning program.  I also started taking yoga twice a week, which I love.  The instructor is great, there are only 5 of us in the class (two whom I knew prior to class) and it is another Spanish immersion event for me.  So life continues to go well for us in Peru.

Our last tour in the Paracas area was a trip to Tambo Colorado, which roughly translates as “red place” or “red resting place.” Built in the mid to late 1400s during the reign of the Incan Pachacutec, Tambo Colorado is believed to have been an administrative site used when the Incan ruling class travelled on the Inca Trail from Cuzco, the historic capital of the Incan empire, to other parts of the empire.  It is strategically located on the road that runs between the coast and the mountains and built into the side of a mountain, overlooking the Pisco Valley.  Due to the desert conditions, the site is the best preserved example of adobe construction from the Incan era and is famous for retaining some original red, yellow and white paint on its walls.

View from the Top

View from the Main Square 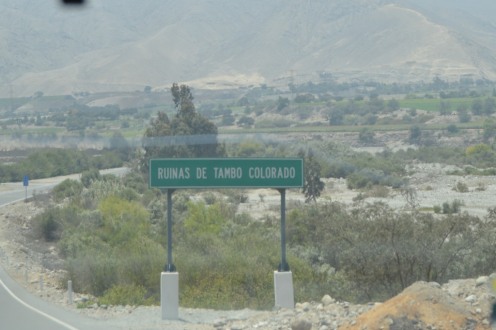 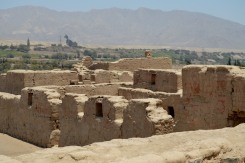 View from the Square

The pictures don’t do justice to the site, which quite large and impressive.  If memory serves me, starting from the river, there was a burial ground, then buildings that were believed to house the lower class workers/animals, the large public square, and then living areas that ascend the hill and end with the ruling class’s  quarters at the top.  The architecture has typical Incan features, such as trapezoid wall niches (double niches in the ruler’s quarters), trapezoid doorways, and geometric ornamentation in the ruling class’s quarters.  The layout of the rulers’ quarters was really interesting  and designed with security in mind: rooms with two doorways, so a quick get-away could be made; narrow hallways that allowed only one person to pass; sentry niches at the doorways believed to be the ruler’s bedroom; and two very nice baths, complete with irrigation systems and drains. 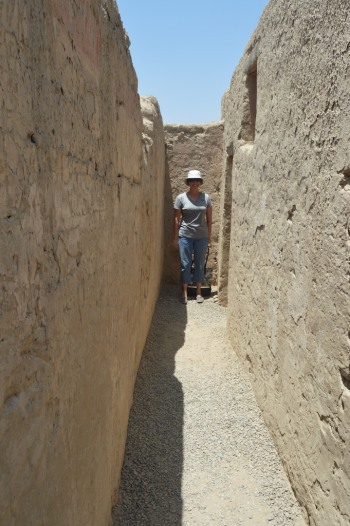 Matt in the Bath 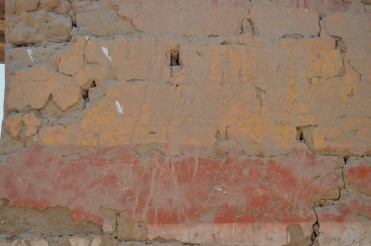 Finally, the site had the added bonus of our first view of the Inca trail (in the picture it winds up the hill).  While it is possible that we have seen it before, this was the first time we realized what it was.  The Incans had an amazing road system, with two main North-South arteries, connected by many branches.  The most famous part of the trail is the hike to Machu Picchu, something we intend to do while we live here.