After our flight over the Nazca lines, we toured the Chauchilla Cemetery, the Nazca’s final resting place that dates back to 200-900 AD. The preservation techniques used by the Nazca, together with the arid conditions, created an amazing combination for body preservation. The tombs were discovered in the 1920s and subsequently raided countless times before the government placed them under protection and took efforts to restore some of the tombs to their original condition and rebury other remains.  It is a surreal site: the barren landscape stretches endlessly and yet these tombs lie within.  The mummies themselves initially appear almost fake, the gruesome details too perfect – a foot, teeth, hair.  But once the reality sets in that these were real, live people, it gets creepy.  So just in time for Halloween (and with all due respect to the dead), I bring you the mummies:

Notable qualities of the mummies include the finely woven textiles that cover them, the fetal position they are all bound in and the fact that apparently they all face east in the tombs.  I say apparently because the graves were robbed and later restored, so how we can know that all the mummies faced east?  Maybe only certain ones did – dignitaries, women, peasants, who knows?  There is also a theory that the very long haired mummies were the shamans or priests of the community, but I am not sure what support there is for that theory.  In addition to the dead, the tombs contain animals, pottery and other artifacts, including seashells.  Regardless of what we don’t know, the cemetery is an incredible, albeit morbid, sight. 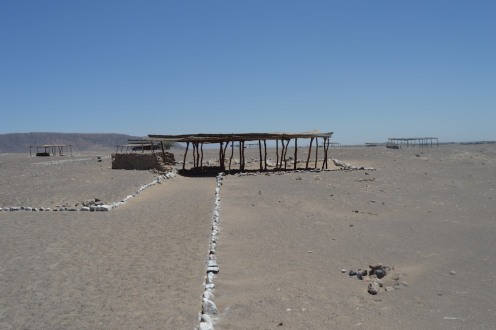 Preceding the Incas and the Nazcas were the Paracas, who lived in the Ica desert between 1300 BC and 200 AD.   Before heading to coastal Paracas to continue our vacation, we also saw some Paracas lines, which differ from the Nazca lines in that they are situated on the side of hills and depict humanoid figures instead of animal and geometric shapes.  The Paracas also are known for skull binding from birth until about age 8, which would create elongated or oddly shaped skulls believed to identify tribes, and brain surgery (not sure whether such surgery was necessitated due to the skull binding).  You guessed it – elongated heads and sand drawings – a theory that the Paracas were extraterrestrials also exists!

Next: We hit the beach!