Remember the crying Indian Chief in the Public Service Advertisement in the 70s for the Keep America Beautiful campaign?  He paddled his canoe through a garbage-strewn river, passed industries spewing pollution, landed on a highway watching cars choke out fumes and, ultimately, had garbage thrown thrown at his feet.   That guy is bawling here in Cajamarca. 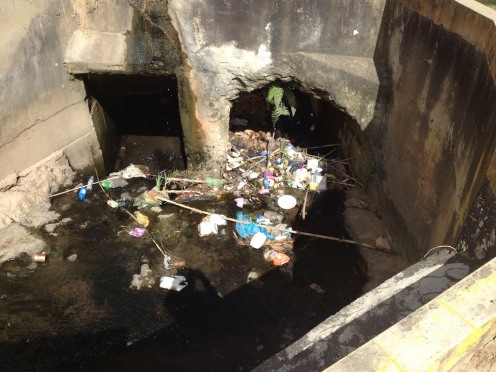 Trash in the Wind

For a culture that worships Pachamama, or Mother Earth, the lack of respect for the land is puzzling.  It is shocking to see trash everywhere and people littering without an apparent care.  When we went to the Baños bash, we had to walk a few blocks to find any trash containers; everyone else was simply throwing the used food containers on the ground.  Shortly after arriving here, I saw a tiny child throw a plastic cup and spoon on the ground after finishing a jello treat.  The first time I was stunned and assumed the mother didn’t notice.  Now I realize that the mother taught the child to throw her trash on the ground.  The odd part is that our garbage is picked up 7 days a week.  There are also street cleaners – people, not machines – that go out every day to tidy the streets.  But there is simply no way to keep up with the constant stream of trash.

It isn’t just the litter, either.  The concept of using less plastic or disposable items doesn’t exist here.   Even if I bring my tote bag to the grocery store, the clerks still want to put my groceries in plastic bags first.  All of the street food is served in plastic or styrofoam and there are countless street vendors. When we arrived, Baños had no recycling program.  It was painful to throw out plastic bottles and other recyclables, but we were told that while we could bring them to school theoretically to be recycled, there isn’t really any such program in the area. Baños now gives us a recycling bag every week or so and we use it, but it is likely the recyclables also end up in a landfill.  Actually, the plastic bottles are collected from our trash by farm ladies, so at least there is some grass roots recycling.  Unfortunately, these ladies often tear apart the trash bags and leave the rest of the trash scattered on the sidewalk and street after they take what they want.  So even before the recycling bags, we would try to leave the plastic in separate bags to reduce the mess.

Water fares no better than land.  We have rivers that run from the mountains into Baños, but instead of being fresh, glistening springs, they are also choked with pollution.  Bags of trash are dumped in the rivers.  People wash themselves, clothes and cars in the rivers, the latter by actually driving their cars into the water.   While I recognize that some of these people are very poor and may need to wash themselves or their clothes in the river, the same cannot apply to their vehicles.  It is simply acceptable here, as evidenced by excavation companies pulling their dump trucks in the river to rinse off the excavated rocks.

I am adjusting to aspects of my life in Peru, but I don’t think the prevalent trash ever will be one of them.

4 thoughts on “The Chief Cries in Cajamarca”