On Day 12 I ate rat.  Okay, it really was guinea pig, which is a Peruvian specialty called cuy, but it sure looked like a rat. 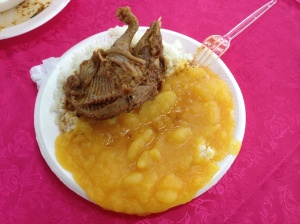 The taste was fine, not like chicken as I expected and with some nice creole-type spices, but the presentation was such that I don’t intend to ever eat it again and in fact may have a nightmare about it.  Matt, who had had been gunning to try it and actually bought it, couldn’t eat it and I thought he was going to throw up as it sat on our table at the Mixtura Cajamarca (the Cajamarca Food Festival).

Cuy is on the menu of just about every restaurant in the area and is offered two ways: fried and stewed.  There was no way I would have tried the fried cuy as those look like flayed bats but I ignorantly thought stewed would mean the meat was off the bone and chopped in little pieces.  I knew something was up when Matt was walking back to our table with his plate in hand and a peculiar look on his face.    And there it was: a half (we think, we did our best not to look too closely) stewed guinea pig, complete with little nasty claws and a prominent rat-like tooth.  It was worse when we went to turn it over in the hopes that the other side would look less rat-like and then saw its little head and ear.

Matt was done, but I picked away at the edge of it, trying to not look at it, to get a little taste.  I succeeded and called it quits after about 1/8 of a normal sized bite.

Then it sat on our table until the guy clearing plates came by.  He was very friendly and concerned that we didn’t like it and asked if the taste was too strong or meat too tough. How do you explain to someone that his national dish is revolting to you without being rude?  The best I could come up with was that I couldn’t look at the tooth, which gave him a good laugh.  I think he was relieved later when he cleared our dessert plates and saw we had eaten every bite.

Apart from the cuy, we enjoyed the Mixtura, which is a fundraiser for the neighborhoods of the city with the proceeds going toward the Carnival parties.  Each neighborhood makes a typical Cajamarquena dish and your entrance fee  ($9.35) allows you an appetizer, entrée and dessert, which you eat in a covered pavilion while enjoying music from a band.   I had Caldo Verde, or green soup, for my appetizer.  It is a broth-based soup with the “green” coming from fresh parsley and possibly other herbs.  It has potatoes, fresh cheese and boiled egg.  Really delicious.

Matt had fried, stuffed potatoes, which were sliced potatoes pan fried with various spices and some unidentifiable meat that he believes were chicken innards.  The potatoes were tasty; I passed on the innards, but Matt likes them so he ate them.  Our other appetizer choice was a huge ear of boiled corn with a generous slice of fresh cheese.  After the cuy fiasco, I got us the Parrillada, or grilled meat plate, to share.  The plate contained a very thin filet, a red sausage of some kind, boiled potato and cooked carrots.  The potato was presented cut in half and each half had a different green sauce.  Both were good although one was quite spicy.  The Parrillada was a much better choice for us than the cuy!  Other entrée options were fried cuy, roasted hen leg, grilled chicken, Chicharones, which is a common pork dish that is cut up stewed chunks of meat served over huge kernels of corn, or fried trout.  Our dessert options were various cakes, gelatin, figs with honey or some gooey, fruity tart.  We each opted for a slice of cake; both were very good: moist with a wonderful chocolate flavor.  Matt’s slice had a caramel frosting and filling and mine was maraschino.  A delicious end to the Mixtura.