Cajamarquinos know how to party! Cajamarca is the Carnival Capital of Peru and the official Cajamarca “Programa Carnaval” has events beginning on January 23 and ending on March 9. To the uninitiated (us) it was a little hard to figure out what is Carnival related and why, but here are the main events that we experienced.

Water, Water everywhere.  This phenomenon actually began before January 23 when my friend Mistina and I were on a walk and got sprayed with water from a passing vehicle.  She bore the brunt of the attack and looked at her soggy clothes with a shocked expression . “What was that?  Is this water?” We decided to assume the best, that it was water, but were confused by the experience. We had never encountered any anti-American animus but wondered whether something had happened while we were on Christmas break that would lead to random, anonymous aggression. A couple days later I was walking my usual bike path route when WHOOSH!  A bucket of water was thrown at me. Thankfully, the aim was off so I was merely splashed with the aftereffects. I turned and yelled at the passing vehicle (maybe even made a nasty gesture, it was instinct, I swear) and the guys in the truck bed were busting a gut. Matt did some investigation at work and learned that water antics are a part of Carnival and start sometime in January. So attacks with water balloons, super soakers, buckets and hoses are all in good fun, condoned and to be expected. Despite this, we didn’t have too many other experiences with random acts of water until the parades this past weekend. Matt inadvertently stumbled into a water fight in our neighborhood last week, but as some of the participants were his students they respectfully gave him a pass. The same thing happened this weekend as we were walking from one of the parades. 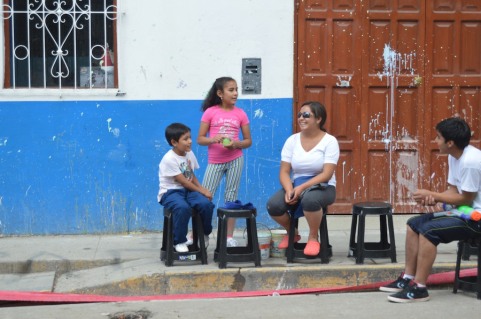 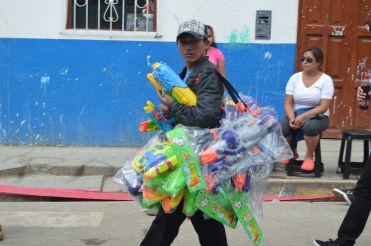 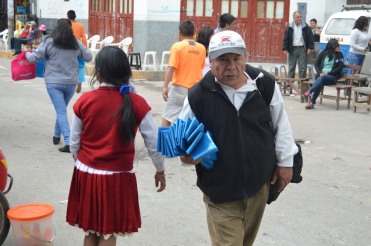 Ño Carnavalón.  This guy shows up everywhere and can best be described as the Life of the Party (or, in this case, Carnival). For awhile I understood him to be a demon but I am not sure that is the case although he was dressed like a devil when he got married to the Doña Carnavalón in Baños a couple of weekends ago and he generally looks pretty scary. Saturday’s parade was the Ingreso de Ño Carnavalón (Arrival of the Carnival Ño), the event that really gets the party started. Sunday and Monday’s parades featured the Ño (or various versions of him), last night was his wake (yep, he died. Probably from too much partying) and today was his cremation in Baños. RIP until next year Ño Carnivalón, and maybe we can finally get a full night’s sleep! Last night the music started in Baños at 11:30 pm and this morning on Matt’s 5:30 am walk to work he passed three guys, one holding up his friend, who was holding a beer, and the third playing a snare drum. The party never stops! 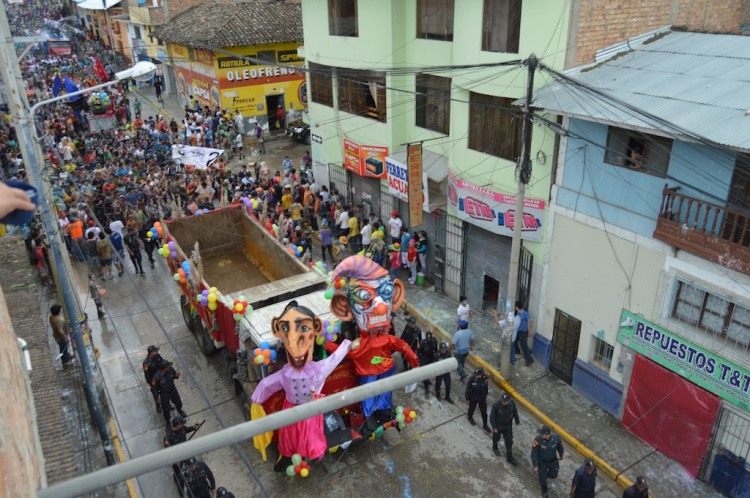 The Ño and Doña Arrive 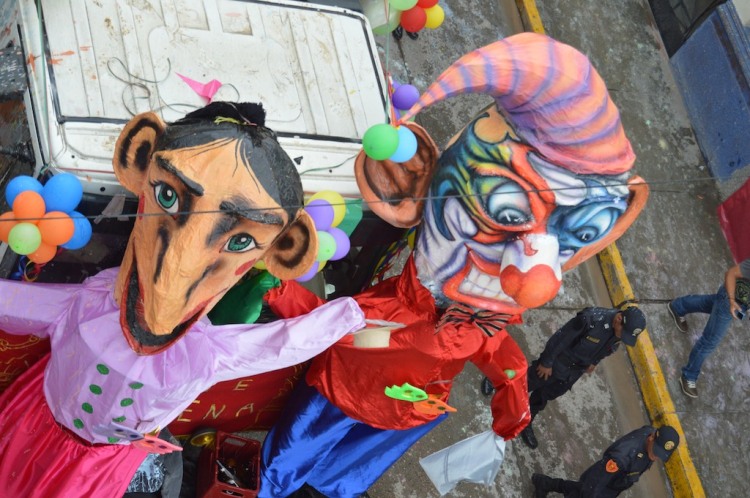 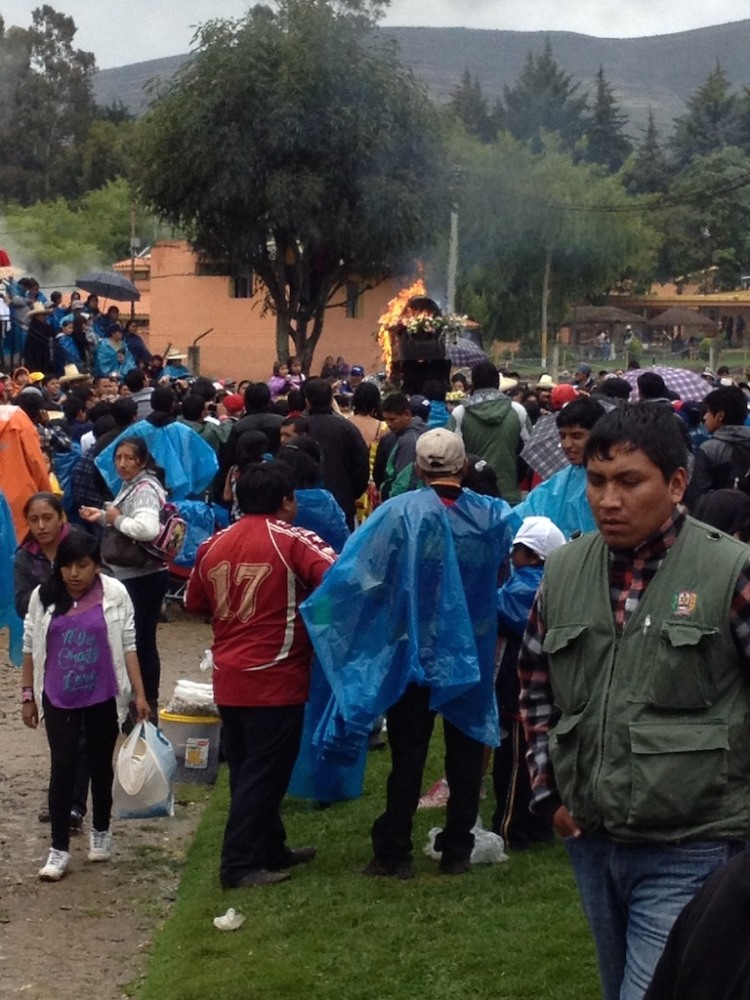 The Paint Parade.  “Stay home,” we were warned, “It’s dirty. People are out of control.” Saturday’s parade, while technically called the Ingreso de Ño Carnavalón, is locally known as the paint parade. Apart from the truck carrying Ño and Doña, the rest of the parade is comprised of gangs of people, who sing, dance, drink and throw paint at everyone and everything. People, cars, houses, the police – nothing is sacred. We were invited to our friend Maribel’s house, which is conveniently located on the parade route, for breakfast and to enjoy the parade.  And by “enjoy” I mean lob water balloons and, when those ran out, buckets of water at the parade participants from the roof of her building! 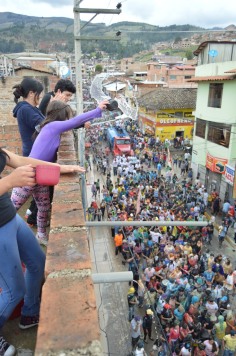 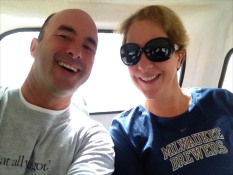 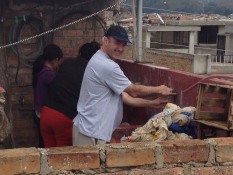 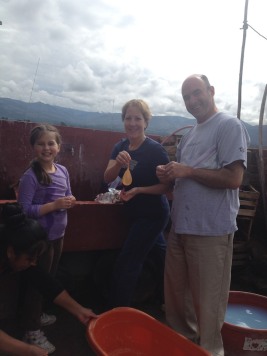 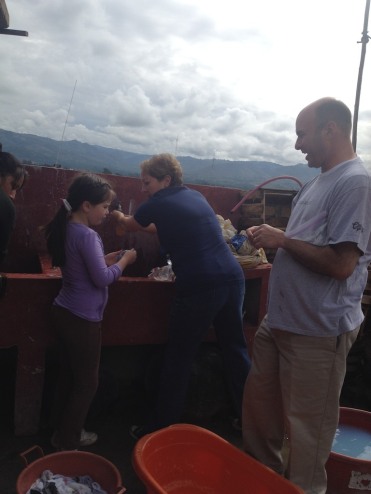 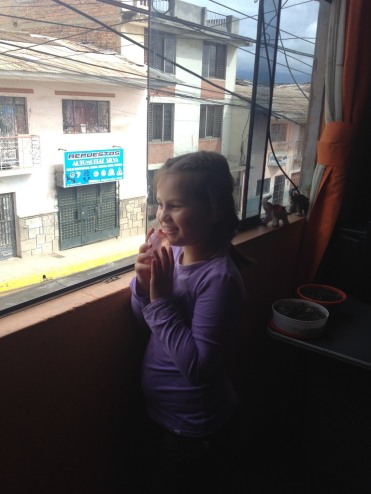 Not that we were safe. First, I will never engage in bomb making as I managed to soak myself (and Matt) by overfilling balloons. Kiera, Maribel’s niece, was worse and changed her clothes 2 times before we even began (of course, she is only 8). Then the neighbors decided to wage water war on us (and they were slightly higher up and had better throwing arms) and finally, this truck was in the parade to retaliate against roof watchers like us. 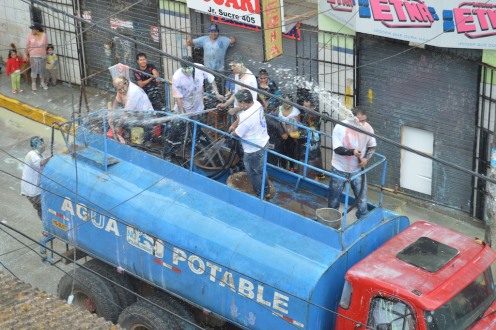 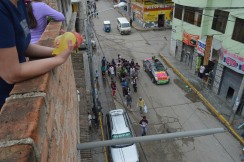 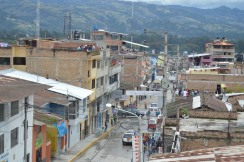 Ready on the Roofs 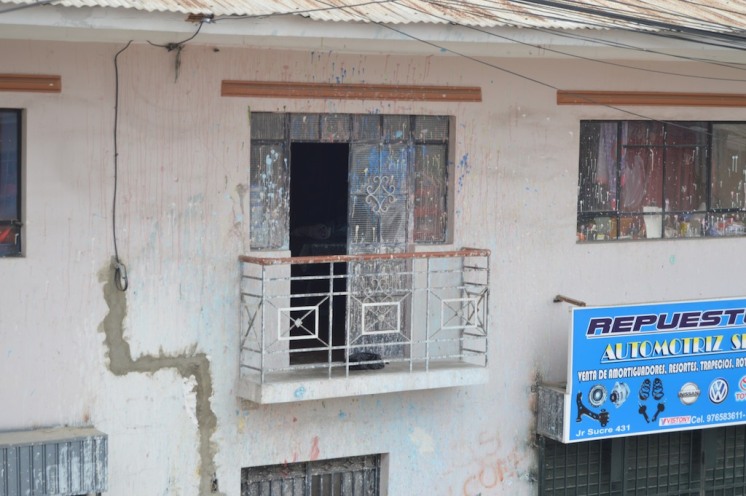 After the parade passed we had a nice, traditional lunch of fried trout, corn and rice and then decided to join the fray. I was a little nervous given all the warnings, but wasn’t going to be the party pooper. So 8 of us packed into a sedan cab (9 counting the driver) and buzzed off to the fun.  And was it fun!  Being conspicuously paint free, we were quickly accosted and painted. People literally surrounded us and slapped, threw, dabbed or dumped paint on us. And then they offered us shots! We were invited to tag along with one group and at every turn they would herd us along with them. It was hilarious – singing (the same endless tune with different verses, which Matt and I faked knowing as people urged us to sing), dancing, drinking (okay, I declined the shots for the most part as I think the bottles had as much paint as alcohol in them). Eventually we ran into some friends of Maribel’s and we ditched our first gang and joined our second one. We ended up in front of someone’s house and the carousing continued, including the homeowners bringing out chicha de jora, a traditional corn beer, cañazo, distilled sugar cane, and a pan of rice and sausage. Apparently these street parties are common as we saw many of them.  Of course, now that we were part of the parade, we were doused with water, which was karmic payback, no doubt!  After a couple of hours, the crowd was getting drunk, it started raining and we decided to call it a day on a high note. The paint parade got two thumbs up from Matt and me and was our favorite parade of Carnival.  To get a complete feel for the event, check out Matt’s blog where he posted videos of the day. http://mattgeiger.blogspot.com/2014/03/carnivales-2014-day-one-videos.html 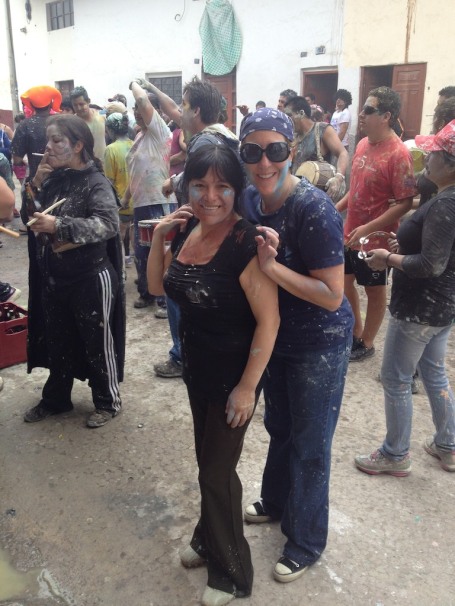 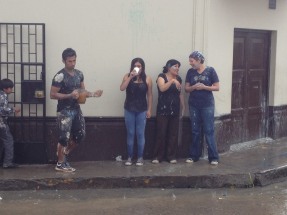 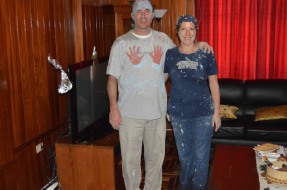 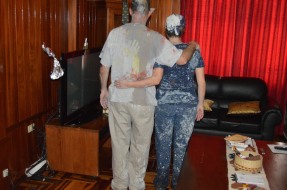 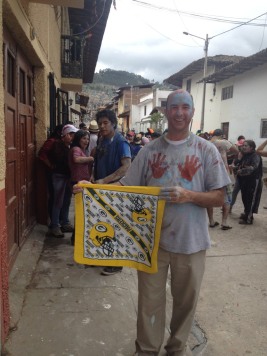 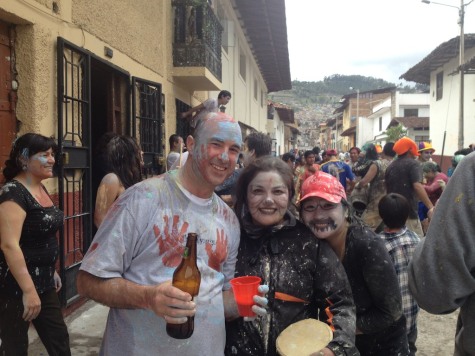 Matt and Our New Friends 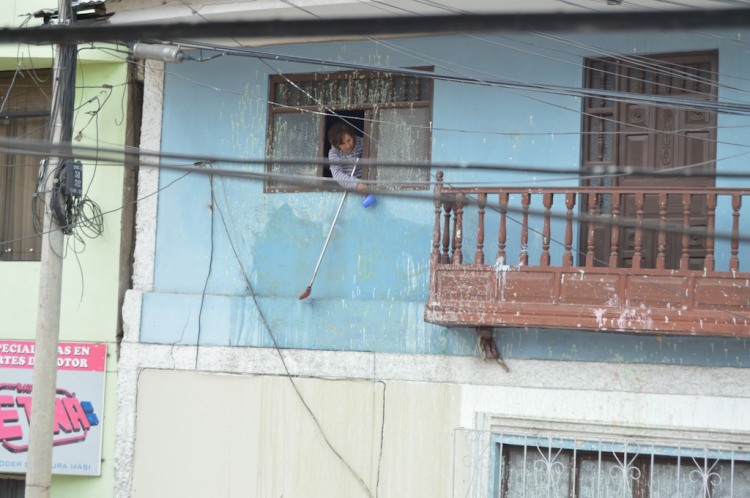 It is hard getting used to not drinking the water.  While the water here is theoretically potable, it isn’t for us.  And not drinking includes: not brushing your teeth with it, not opening your mouth when you are in the shower or washing your face, not rinsing food with it, not having iced drinks when we are out.  We have a 20-liter container of bottled water that we use for these things, which costs 16 nuevos soles or $6.  So far it lasts about 6 days.  The good news is that to get a refill, we can just stop in or call our corner store and they deliver it.  A guy rides it over on his scooter, comes in and swaps out the old bottle for the new.  Udate: We found an even better deal – 10 soles for established delivery every week or we can call to get water more frequently.  This sale happened in what we are learning is the customary fashion – someone came to our house and when we said no the first time, came back a week later.  Door to door salespeople are common here and they appear to sell just about everything: cell/internet service, rugs, kitchen wares, stuffed animals and water.  The cell/internet people are canvassing the neighborhood in earnest these days and we get several knocks on our door a day from them.

Using bottled water isn’t the biggest hardship, but is a pain when you want to brush your teeth and need to run downstairs for some water.  We have also been advised not to eat fruits or uncooked vegetables in restaurants right now because they will have been washed in “bad” (for us) water.  Once we adjust a bit to the environment (i.e., dirt) around here, it should be less of a risk to eat those foods outside our house.

In the meantime, washing fruits and vegetables is a process.  First, I rinse them and then soak them in “bad” water and bleach, yes, bleach, for 5 minutes. Swish them around a bit, hope I don’t get bleach on my clothes and then rinse them with “good” water.  I need to rinse them thoroughly so they don’t taste like bleach, which uses quite a bit of good water.  So I am now experimenting with turning “bad” water into “good” water by boiling it for 3 minutes.  While the travel nurse told us 20 seconds was adequate boiling time, the CDC says 1 minute is needed and 3 minutes if at high altitude.  So let’s hope 3 minutes works otherwise Matt and I might be sick tomorrow from our dinner salad! 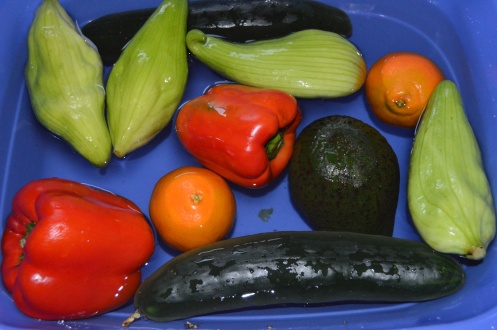 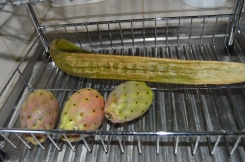 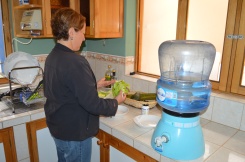 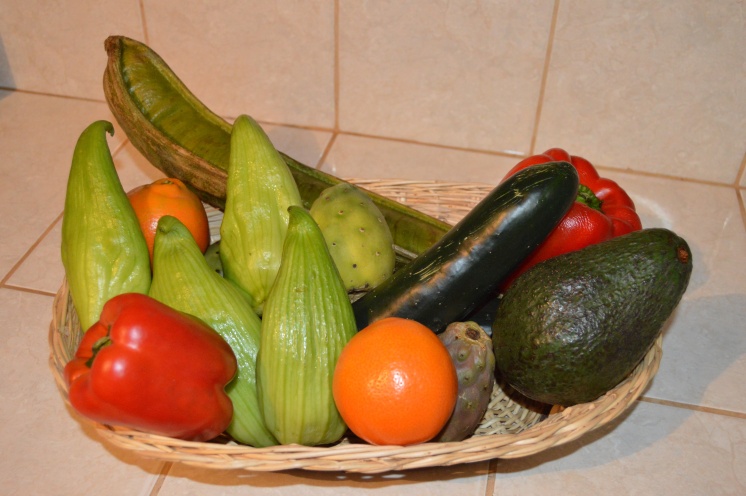