Today regional and municipal elections are being held across Peru. Peru has 24 departments, or regions, and one constitutional province, Callao. 24 Regional Presidents will be elected (Lima does not have one as it is the site of the national government) and many mayors and other local officials. Cajamarca has seen intense campaigning for several months due to competing beliefs about allowing a new gold mine in the region. This mine has been in the works for several years and was the subject of violent clashes between local farmers and the government in 2011 and 2012 and has been on hold since that time. Cajamarca has the largest producing gold mine in the world but is the poorest region in Peru. This fact and the environmental and social issues associated with the mine make for a difficult situation. Gregorio Santos Guerrero (“Goyo”) (Mas party) is the current Regional President of Cajamarca and the favorite to win. He has been in prison on corruption charges since June. He is a vocal opponent of the mine and can be elected despite his incarceration. If Goyo wins, the Regional Vice-President for the Mas party will assume the Regional President role until Goyo gets released. 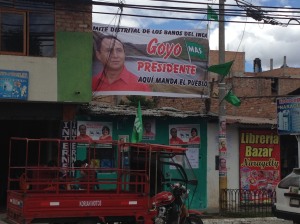 Campaign signs are everywhere. Due to the lack of literacy in Peru, the campaign signs often focus more on the symbol of the party than they do on the candidates themselves. I have identified 19 parties with a candidate in the Cajamarca elections: A, K, T, 1, 2, 3, 4, 5, 6, Tree, Bull, Sombrero, Mother and Child, House, MÁS, Faucet, Star, Flower and Wheat. I tried to research what party went with what symbol but could find information for very few on them on the internet.

It is fascinating to see the signs competing for space on a single building. I always felt irritation when a neighbor had a modest yard sign of the party I opposed. There is little modest about these signs and I wonder what they do for neighbor relations. 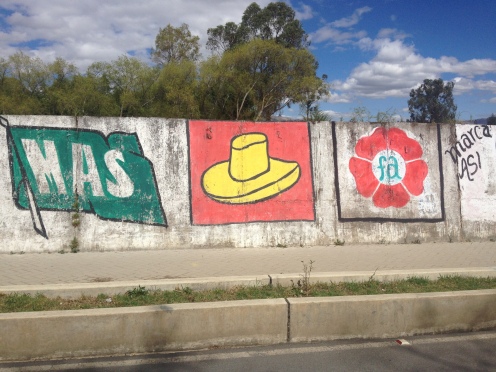 Ciclovia has a lot going on 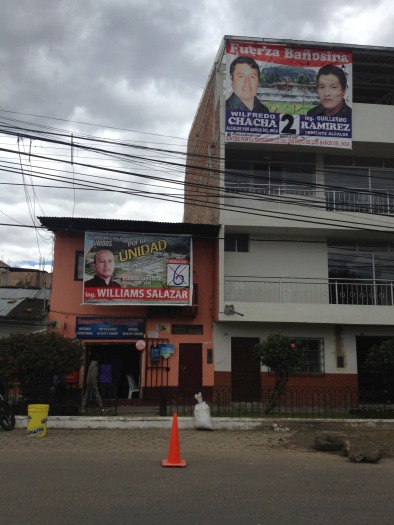 When the signs first started appearing, we were confused: were parties running on platforms against trees, sombreros or mothers and children? Was there massive anti-campaigning with dirty tactics?

Matt asked a co-worker who explained that the signs are telling voters which symbol to mark. Oh. Then the signs started showing up saying “Marca Así” (“Mark Like This”) or having a disembodied hand with a pen, and it became more apparent.

There also are cars and trucks driving around with signs and flags supporting parties. Sometimes these vehicles are blasting political propaganda from loudspeakers. We also had several political rallies in the Plaza de Armas and the fairgrounds in Baños. Active campaigning is not allowed 48 hours prior to an election, so things became much quieter then. 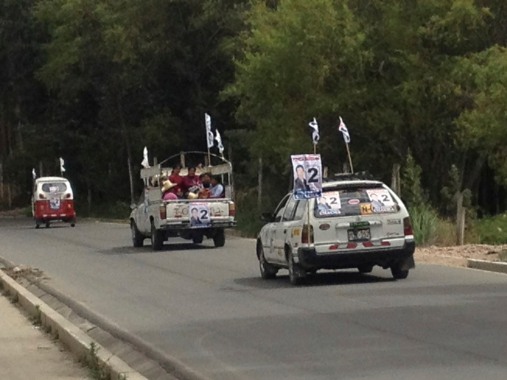 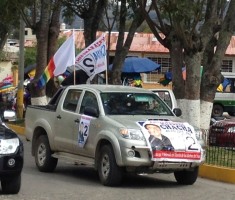 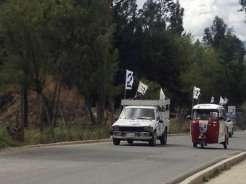 Support for the 3s

I came across this on a walk. 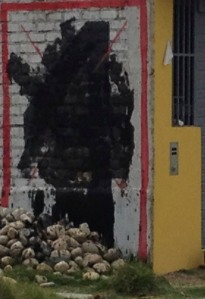 Apparently, someone at this house changed his or her mind.

#1 Voting is obligatory in Peru for citizens between the ages of 18 and 70. A voter who fails to vote is assessed a fine depending on the economic level of his or her local community. The fine can range from 20-150 soles ($7.20-$54) and must be paid before the person can engage in other civic activities (get a license, pay municipal utilities etc.). Voting percentages are much higher than in the US – in the mid-to-high 80 percentiles.

#2 Voters vote in their municipality, but not necessarily near their home. My Spanish teacher and her husband vote at two separate locations despite living together.

#3 Voters must present their IDs, which are obligatory for Peruvian citizens to carry at all times. The voter’s name is found in the poll book and then the voter receives a ballot which he or she marks, folds, and places in the ballot box (these are ultimately hand counted). The voter returns to the table, signs and places a fingerprint next to his or her name in the poll book, dips his or her finger in ink to show voting occurred and then receives his or her ID.

#4 Voters are assigned at random to be uncompensated poll workers (miembros de mesa). The fine for failing to appear to work is higher than the fine for failing to vote. If no one who is assigned to work the table appears, the first voters in line will be conscripted into duty. For this reason, many people arrive a little later in the day to vote or mill around the area to make sure the polling place is manned before getting in line.

#5 Every polling place has a member of the army or local police force on duty. This is to ensure order and no ballot tampering. Apparently Shining Path used to disrupt elections as part of its terrorist techniques and for other parties, stealing ballots was the easy way to steal an election.

#6 Peru is dry – no alcohol sales – for 48 hours before the election and the day of the election (always a Sunday). Talk about ruining a weekend!

It is odd to be in the midst of such relentless campaigning and to have no opinion or voice in the election. It will be interesting to see the outcome of this election and the repercussions in Cajamarca as a result.